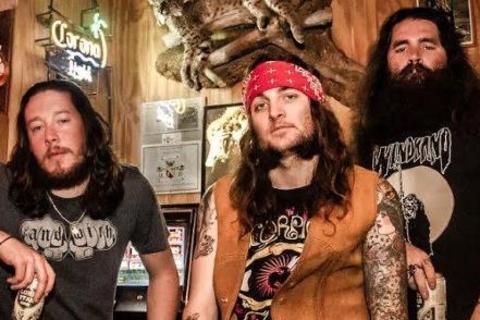 Rock n’ Roll history is rife with brothers working together to create their artistic vision. But rarely do we hear about a full-fledged family unit embarking down the treacherous path of a musical career. In the case of Texas based Mothership, the Brother Juett (Kyle on bass, younger brother Kelley on guitar) enlisted the aid of their father, John Juett, to help get the ‘ship off the ground. Raised on a healthy dose of their father’s 70’s-era record collection, the brothers began crafting songs fueled on the raucous and raw good time vibe when music seemed to know no bounds. Lifting off the pad for the first time in 2010, the band began to gain momentum and notoriety with their unabashed live shows. Knowing that the
service of the family patriarch was temporary, Father Juett actively helped his boys find his replacement, and in late 2011, enter the mighty Judge Smith to hammer away on the skins.

In early 2012, Mothership entered Crystal Clear Studios with Wo Fat mastermind Kent Stump manning the boards and by mid-year, the band self-released their debut album. It was the combination of the 70’s-era heavy rock fuzz and fury mixed with the blistering guitar solos of the NWOBHM-era that drew the bands attention to California-based Heavy Rock label, Ripple Music. In the waning months of 2012, after a successful year of traveling regionally throughout Texas and opening for national acts such as Prong, Red Fang, Gypsyhawk, Monster Magnet, and Lo-Pan, Mothership officially dubbed Ripple Music as its Home Port. With the official Ripple Music release of the band’s debut record in February of 2013, Mothership began a torrid journey across America and parts of Canada to promote the record, including a tour in support of Gyspyhawk and another in support of Scorpion Child and Kadavar. Currently, the band is holed up in the studio working on new material and plotting a course across Europe in Spring of 2014.