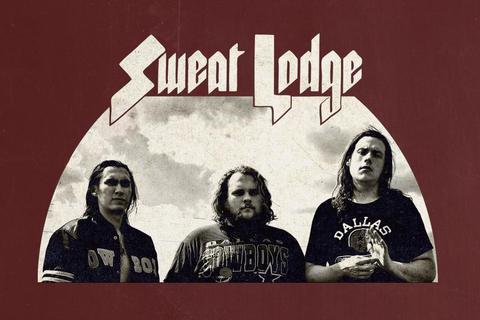 Sweat Lodge is a heavy-metal/psych-rock 5-piece from austin tx,all 5 members members hailing from different parts the state. The band originally formed as a 3-piece(bass,drums,vox) almost on a dare by OBN III's/Bad Sports frontman-guitarist Orville Neeley who subsequently recorded their first release(red/self-titled ep) in winter of 2011. Borrowing from the template and tone set forth by their ominous first offering Sweat Lodge added guitarists Dustin Anderson of communion and friend Javier Gardea in the summer of 2012 to complete and fully realize a lot of the material the band had been waiting to record. Sweat Lodge did a 4 song, limited tape release(black/self-titled ep)that dropped the week of SXSW 2013. Sweat Lodge has shared the stage with heavy acts such as Church of Misery, The Sword, Scorpion Child, Black Tusk, The Shrine, Mondo Generator, Kadavar, Jackyl as well as austin metal mainstays Eagle Claw, American Sharks and town favorites the Unmothered, Communion, Fleshlights, OBN IIIs and Ditch Witch. The band's commitment to bring to heavy music back to the forefront of the American music conscience in now infectious.