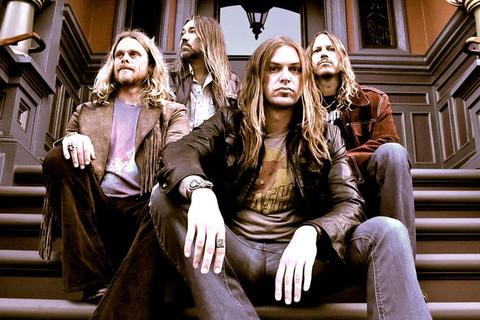 Classic Heavy Rock is once again making an unstoppable advance onto the music scene. One of the greatest new acts of its kind is surely ORCHID. Founded in 2007 in San Francisco, the band is rapidly overtaking and destroying each and every competitor; and there are many reasons why.

Musically, ORCHID owe their sound to the grand masters of rock. They walk in the footsteps of Led Zeppelin, Black Sabbath and even Pink Floyd – they certainly are generating abundant exhilaration wherever they roam. This musical genre, the mix of blues, folk and hard rock, was surely the most widespread bravura in the early seventies, and those legendary acts mentioned above would easily fill stadiums even today. Their timeless music has survived decades of trends and fashions. It has inspired multiple generations of hard rock acts and is once again spreading to the forefront of rock. It is hard music, music with groove, music that is authentic and true to its roots. It can fill the largest of arenas to enthrall millions of concertgoers around the globe.

ORCHID have since risen to the top of this genre and have quickly become one of it's most captivating new acts. It started all in the Bay Area a few years ago – today it has morphed into a triumphant march through international terrains. Rock Hard’s Gotz Künemund recently stated in a video interview that, “today, here at the Hammer of Doom Festival, I have witnessed the coolest band in many years. ORCHID have managed to blow away everything in their path. They were really the best band and their album Capricorn is a stroke of genius, a superb record that never leaves my player!”

ORCHID established their reputation early with the 2009 release of their first EP "Through The Devil’s Doorway". The EP quickly received first-rate reviews around the world naming it an ingenious debut for a band with an auspicious future. Shortly after the release of "Through The Devil’s Doorway", ORCHID began work on their full length album "Capricorn" which was released in 2011 by the small indie label The Church Within Records. The record immediately gained the band a huge following in Europe. The band around the charismatic lead singer Theo Mindell and his fascinating, psychedelic vocals were the new darlings of the retro heavy rock scene. International media stalwarts such as Metal-Planet, Metal Rules, Lord of Metal and Powermetal all spoke immediately about this being the best album of 2011. Quote: “I cannot say enough about this album other than the fact that it will end up on my best of 2011 list.”