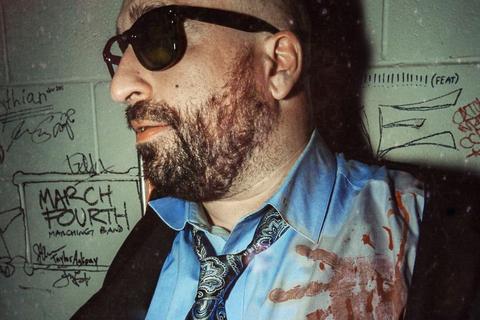 In the past 5 years, indie rapper B. DOLAN has emerged as an artist who does what he wants, when he wants, and leaves a ravenous and growing cult of appreciative fans in his wake.

Since Sage Francis signed Dolan to his Strange Famous imprint, the giant lumberjack-looking East Coast spitter has released a pair of paranoid underground classics in 2008's THE FAILURE and 2010's FALLEN HOUSE, SUNKEN CITY, as well as 2 volumes in the HOUSE OF BEES mixtape series which spurned such anthems as "FILM THE POLICE" and "WHICH SIDE ARE YOU ON?" He's also featured on a number of memorable collaborations with Francis as the EPIC BEARD MEN, as well as alongside Scroobius Pip, Dan Le Sac, and Buck 65 on a number of lasting joints.

In that time he's also cut a path of impossibly ambitious tour dates around the world (over 400 dates in 15 countries, including the now legendary CHURCH OF LOVE & RUIN tour).

This year, B. DOLAN is readying for the most active stretch in an already storied career; an official lp is slated for mid-year on STRANGE FAMOUS, with the promise of a forth-coming HOUSE OF BEES VOL. 3 before that. International tour dates are being booked, with a new LIVE BAND that recently debuted on tour with CIRCLE TAKES THE SQUARE and UNITED NATIONS, winning over astonished hardcore/screamo crowds with a live hip-hop act, and earning critical praise as a live show to watch out for this year.

Dolan is also the founder and co-creator of KNOWMORE.ORG, and has contributed as an independent journalist to THE HUFFINGTON POST, THE BOSTON PHOENIX, and others. He is noted for his activism and commentary in regard to the OCCUPY & COPWATCH movements, as well as the movement to curb CORPORATE ABUSES, and has spoken and performed in a number of University settings on a number of these topics.