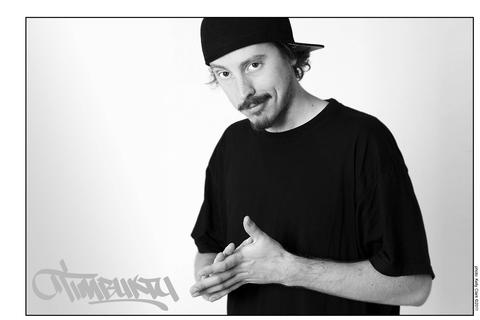 During the zenith of the Golden Age Era of Rap, something strange happened. An artist called Timbuktu, almost as enigmatic as The Artist Formerly Known as Prince, suddenly emerged as a prolific producer and stand-out rhyme-slinger. Within his award-winning group Toolshed, comprised of himself as well as Chokeules and Psybo, Timbuktu established himself as not only a remarkable live performer, gifted lyricist, and talented beat-maker, but also as an active and capable mix engineer (OIART graduate '07). Total package.

Over ten weird, blurry years or so, with dozens of low-profile, cult-classic projects to his acclaim, and several expansive Canadian and American tours under his belt, Timbuktu has gained national and international recognition as being a veteran of the Canadian Hip Hop scene. His 2010 solo release Stranger Danger received great critical acclaim which was reflected in a two month-long iron grip at #1 for the Hip Hop category on the Earshot Canadian College Radio charts.

Timbuktu's ability to adapt and coalesce within a group dynamic has lead to many successful collaborations. In 2011 Timbuktu released 3 new albums in as many groups. The first group, Teenburger dropped Burgertime, an 80's teen movie inspired collaboration with Juno nominated Ghettosocks, with production by Halifax legend, DJ Jorun Bombay. Burgertime has since been nominated for an ECMA for Hip Hop Recording of the Year. The second and third releases Tim facilitated in '11 were Toolshed's 6th LP, The Lost, and Backburner's Heatwave. All three records saw engineering attention from Timbuktu.

Buktu's aptly-named home studio FUN, is located in downtown Toronto, serving as a hub of activity for a cross-section of notable Canadian recording artists including D-Sisive, Ghettosocks, Wordburglar, More or Les, and many more. His contributions as a writer, producer, and engineer are evident on two Juno-nominated albums (2011 Ghettosocks' Treat of the Day, 2011 D-Sisive's Jonestown 2).