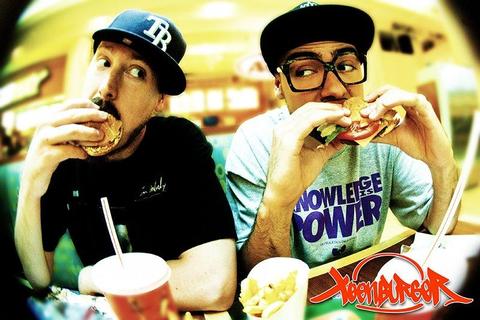 Ghettosocks and Timbuktu are TEENBURGER and they’re a mouthful. Fast times, dope beats and rhymes, and bringing Old-School Rap back to the future are the order of the day for Hip-Hop’s meatiest rap combo. Their debut album, Burgertime, produced entirely by Halifax's DJ Jorun Bombay, quickly became a Hip-Hop classic, acclaimed by critics and fans alike. Celebrating growing up in the ’80s and ’90s, this record is for fans of old-school Hip-Hop, teen movies, keg parties, beach jams, and summer break.

Leading up to the release of Burgertime, Teenburger dropped their debut video for the single “Rock the Discotech (Jo’s Boutique Mix).” Filmed on location in the beautiful winter streets of downtown Toronto, and the ‘famous’ roof in our Halifax hood, Rock The Discotech is a classic, fast-paced, rap-into-the-camera style street video. A tribute to all of our favorite rap videos growing up, this one was all indie, all the way. Shot, directed, and edited by Caley MacLennan.

Not one to rest under the heat-lamp, The Burger immediately headed south to take over the rap scene at SXSW in Austin, Texas. “Hitting with the impact of two asteroids”, Socks and Timbuk were listed as one of the “hottest 13 indie artists at SXSW” (2012) by popular taste-maker site, Style Caster News.

The bürgermeisters have since released a second video from the album for the single “Food Court feat. Saidah C.” Also shot and directed by Caley MacLennan, but this time with the support of a MuchFACT Viral Video grant. Filmed in guerilla style in the food court of Toronto’s famed Eaton Centre, Food Court was created as an opening sequence to a teen movie. Recreating scenes from films such as Fast Times at Ridgemont High, and The Breakfast Club,