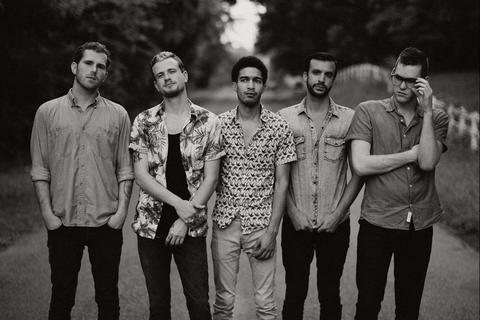 The expansive, electric sound of Flagship was born one humid summer at a music festival in Illinois. Drake Margolnick was there performing on the heels of an EP he had recorded and some friends of his from the band Campbell were there and he asked them if they would be his backing band. It became clear from the first note that this makeshift group had musical chemistry. The group created a sound much greater than the sum of their parts. Back in their mutual hometown of Charlotte, North Carolina it was decided that this musical collaboration should continue.
Frontman Drake Margolnick was born in England, on an Air Force base, the son of a military couple. A few years later, his mother settled in the southern city of Charlotte where Margolnick focused his energies on skateboarding and dirt-bike riding, dreaming of pursuing the sports professionally. Through his teen years, however, music began to completely capture his imagination. After high school graduation, Margolnick moved to Australia to follow his muse. Disillusioned with the scene there, Margolnick returned to Charlotte where he quickly integrated into the burgeoning community of musicians, artists and filmmakers. It was the same soil that guitarist Matthew Padgett, drummer Michael Finster and keyboardist Grant Harding were growing in, a community that expanded across the state to include bassist Chris Comfort. It was here playing in multiple bands in multiple venues—clubs, theaters and coffee houses—that they honed their musical style, a sound that transcends the traditional south but seems right at home in the southern heat.

After forming Flagship, Padget, Harding and Finster immediately began to work with Margolnick on a tight collection of songs—self-producing and engineering the Blackbush EP. Here, the group began to formulate an atmospheric mixture of pop-minded melodies and passionate, aggressive performance. It was the strength of these songs that attracted the attention of Bright Antenna Records, a label that wanted to see the group grow beyond their regional fanbase while maintaining their distinct musical personality. After playing stages across the U.S. for a year, Flagship recorded their first full-length LP with the producer Ben Allen (Animal Collective, Washed Out). Set to release on October 8, 2013, the album is both a culmination of all that came before and the sound of what comes next.