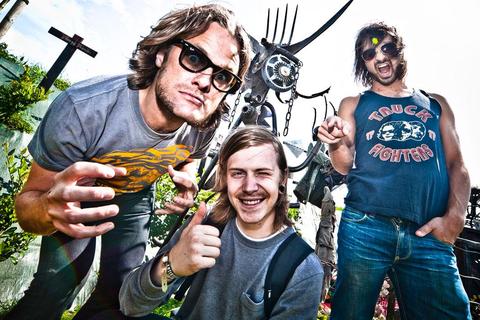 Listen to The Chairman

To hear Truckfighters’ music is to hear the sounds of the desert. It’s in their wide open expanse, it’s in their grand open groove and dust-caked metal riffs. You can hear progression and imagination. This is a band bred on the California badlands, on sprawling vistas and parched wilderness.

There is just one thing. They’re from Sweden.
“We have the exact opposite weather and landscape to California,” says the band’s guitarist Niklas ‘Dango’ Källgren. “But there is a wilderness there, so I think we share something with people who make music in desert landscapes: we both do it in places where there aren’t many people around. Maybe that’s why we can tap into those sounds. You can create big empty spaces in music whether you are in the California desert or whether you are in Sweden.”

They are sounds that they have been making since Niklas teamed up with bassist and vocalist Oskar ‘Ozo’ Cedermalm in Orebro, Sweden in 2001. A succession of drummers have come and gone – “We have a very Spinal Tap relationship with drummers,” says Niklas, “our original drummer quit the band because he smoked too much weed, our next one damaged his wrists … we keep having problems” – but now the powerhouse playing of Andre ‘Poncho’ Kvarnström drives their groove.

Over the course of five EPs and three previous albums, they have honed, tautened and expanded their sound, moving from out-and-out riffing to more melodic, crafted songwriting. Yet, inherent in everything is the fuzzed-out mania that defines them.

“That fuzz is the sound in my head that I went to get out,” says Niklas. “The new record just has more of everything we’ve ever done. It’s melodic and groovy but very progressive too. The songwriting’s better.”
That new record was forged from jams that the band then worked hard to convert into songs. Importantly, they say they have never attempted to write to a style. Instead, their songs come from the heart.

“We never, ever sit down and work out what we’re going to do, we just do it,” says Niklas. “We try to make music that will last, that will be around for a long time. We’re not aiming to write anything hip, we try to be timeless. We’re not trying to adapt to anything that’s popular or write hits, and I think that’s our strength.
“I think people like us because they know we’re writing music we love. We’re not chasing a crowd, we’re doing what makes us happy and that gives our songwriting a lot of integrity. We do things they way we like it.”
It has earned them comparisons to Queens Of The Stone Age’s early sound, and that band’s singer Josh Homme is a fan who appeared in a 2011 documentary about Truckfighters.

“They’re a big influence – I tell people that we sound like Queens Of The Stone Age and Tool, but we’re definitely more metal that Queens Of The Stone Age,” says Niklas. “We’re more like their first album. We’ve got those fuzzy guitars, but we’ve got progression too.”
And ambition. The desert rock scene in Sweden consists, more or less, of just them. Unafraid to plough their own furrow, they have forged ahead and spend months on the road touring the world. Being in front of crowds, sweat-sodden and crazed is where they are happiest. It’s why a Truckfighters show is such a wild, free-form, charged affair.

“Playing shows is the greatest thing you can do in a band. You can play people the music that you made, and see that exchange of energy,” says Niklas. “The energy is the key, it’s a give and take thing with the crowd. We get excited by the people there, the songs, the volume and the power and so we go a bit crazy. We don’t allow things to get boring, we keep things new and exciting live. Every night when we play, we want the show to be crazy.”

It’s why they can’t see anything changing soon. With their fourth album primed and ready to explode, they will be on the road for a long while yet: bringing the fuzz, the fury and desert sounds of Sweden to sweltering venues and raucous crowds. And as they’re up there onstage, know that this is what they were born to do, this is what they love.

“It’s important to point out that we do only what we love,” says Niklas finally. “We don’t really care what other people think of us, we’re doing this for ourselves. We always have.”