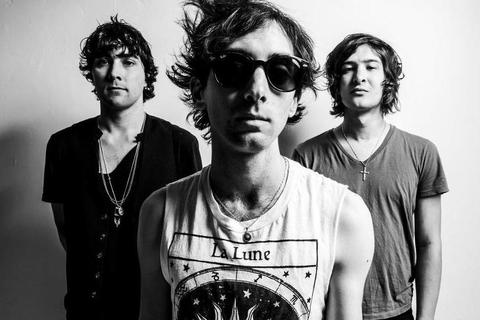 Out now on Bright Antenna Records, Beware of Darkness’ (Kyle Nicolaides, Tony Cupito, and Daniel Curcio) debut full-length Orthodox is a musical assault—filled with squealing guitars, barbed hooks, and timeless glam posturing. At first listen, the album is a mindless good time—aimed somewhere between the gut and dirty dive bar. It is not, however, a thoughtless endeavor.

“No one asks why you do things,” muses frontman Kyle Nicolaides. “Why do you love what you love? I had to ask why I want to do this. Music, you can totally scrape by without thinking about it, if that makes sense. You can half-heartedly write songs and have success at it.”

Weaned on a heady blend of The Beatles and Led Zeppelin, putting thought into music has always come easily to Nicolaides. However it wasn’t until he met bandmate Tony Cupito—the only other white guy at an all African-American R&B show—that Beware of Darkness began to take shape. In a stroke of luck—or perhaps fate—Cupito lead Nicolaides in finding bassist Daniel Curcio, who happened to be in town to meet a half-brother he never knew he had.

Recorded entirely in two weeks at the Sound Factory and Valley Recorder in Hollywood, CA, executive produced by Dave Sardy and produced by Greg Gordon and Nicolaides, Beware of Darkness’ debut-full length is a heady meditation on death—and its implications for the living.

“I remember being thirteen or fourteen and being in school one day, and having that realization that I’m going to die,” he says. “That’s kind of why I started writing songs and working really hard in high school…It was weird, because there was a motivation for me. I had read an article about a local girl who had just died in a car crash. You realize, that man, it could happen any time.”

With the material written while Nicolaides was between the ages of 20 and 21, the musician found he had to go back to the past to understand his current work.

“The working title was Bleak,” he reveals. “It became Orthodox. I kept writing that word down in my journals. Once I finally looked up what it meant, it made sense and it fit. The first half means right and true, the second half means belief. I think the record is a lot about that too. About coming into awareness. You know that age where you come into awareness and you understand how the world works? ‘This is how our food supply works? This is how government works?’ For me, it’s about that kind of thing: self-awareness, what that is, realizing that you can lose people, realizing that friends disappear, and understanding how things work.”

Hard won realizations and cold comforts dot the album. “There’s one song called ‘Morning Tea,’ recounts Nicolaides. “It was the first song that I had written where I felt like I pulled a huge leech off my back. I felt twenty pounds lighter after I wrote it.”

However, nowhere is that sense of understanding in loss more evident than “All Who Remain,” a ballad co-written by John 5 of Rob Zombie.

“We’ve never got a reaction to playing a song like that,” says Nicolaides. “The first time we played it live, we sound-checked with it in San Diego…the popcorn guy ran up to us and said, ‘What is that song? That was insane! I want to hear it again!’ It’s ridiculous. We’ve never had a song like that. There are always a handful of people after ever song who come up and ask ‘What was that?’ It’s really special. It’s a slow jam and it’s about somebody dying that’s close to you. I’m excited for people to hear that.”

1:00AM Beware Of Darkness