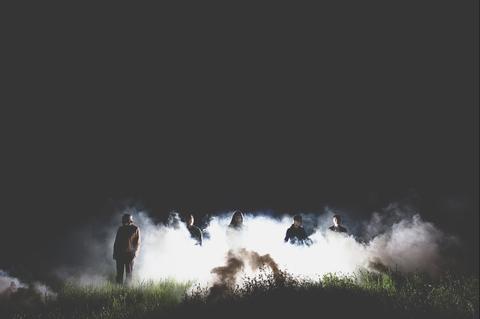 “Live music has so much potential for greatness,” expresses HRVRD vocalist Jesse Clasen. “To me, a studio recording is a snapshot of where a song is at that moment, and it should always continue to evolve and take on new perspectives. Live performances are opportunities to share something unique and beautiful with your audience…I've always admired the artists that let their songs blossom into something new and exciting even after they've been recorded.”

And while HRVRD’s performances let the band explore expanded artistic grounds, one simply cannot deny the power, quality and creativity found within the Charlotte, NC-based band’s recorded material that serves as their foundation. Formed in 2004 by guitarists Lee Herrera and Jason Shaw, the band progressively evolved into a quintet of brilliantly imaginative musicians, rounded out by drummer Tim Cossor, bassist Garrett Leister and the aforementioned hypnotic frontman, Jesse Clasen. Together the band, formerly known as Harvard, released their debut EP Animals in 2008 followed by the critically acclaimed full-length album The Inevitable and I less than a year later through Enjoy The Ride Records.

HRVRD also went on to release their self-produced album Interpretations in 2010, a five-track EP of reimagined versions of songs off of The Inevitable and I, followed by a year and a half of writing for their upcoming album. In January 2012, the band returned to Salad Days Studios in Baltimore, MD to reunite with renowned producer Brian McTernan (Circa Survive, Senses Fail), who had also produced The Inevitable and I. Clasen elaborates on their decision to work with McTernan again explaining, “We record our demos with the intention of listening to them more objectively in order to make them better; however, everyone gets attached to the way the demo sounds and so rarely do we ever make revisions…working with Brian [McTernan] again makes everyone in the band more comfortable though and ready to make those revisions. It is an environment where everyone is ready to do what it takes to enhance the songs.” Shaw adds, “Brian is amazing to work with because he expects the best out of you and is going to reciprocate that ideal in his part of the recording process. He wants every song to have an identity, which is something I personally want in the music I play…it’s nice to work with someone who's on the same page as you.”

On the band’s new album, From The Bird’s Cage, HRVRD’s haunting sound blends intricate and cinematic guitar riffs with dark, passionate lyrics and powerful, driving rhythms. Effortlessly encompassing the impressive technical qualities of underground progressive-rock and experimental outfits, while remaining accessible through honest, relatable lyrics, the fusion creates a full-bodied, dreamlike ambience filled with catchy, yet sonically sinister melodies. Clasen’s ethereal voice defies genres and offers vast vocal range with a wide spectrum of stylistic tones that stand out as notable without overpowering the outfit’s more than capable instrumentations. Their true talent shines not only in their ability to perfectly juxtapose driving and atmospheric elements in a complimentary manner but also in their use of those musical elements to guide and balance the lyrical storytelling.

“The most important thing we kept in mind From The Bird’s Cage was a strict "less is more" rule,” Herrera notes. “In the end, I think the songs are more mature, more heartfelt and more honest, we used all of our experiences from the first record and tried to learn from them to make it better, shorter and more focused.” Lyrically, the new album shares a journey of intense internal struggles of the ordinary man. “It’s about the tension between positive and negative perspectives on relationships, progression, religion, and science,” Clasen expounds. “And more personally, it’s me working out who and what I love, and why.” The band released the sophomore, full-length album through Upstate NY-based independent label Equal Vision Records, in partnership with Enjoy The Ride Records, on February 19, 2013.