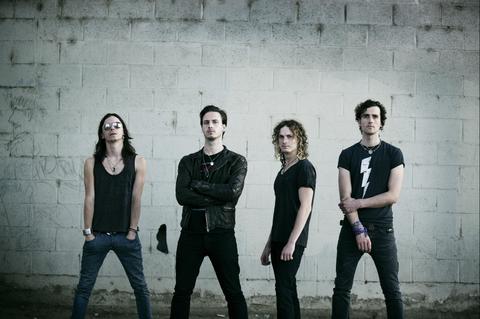 Over the past few years, Heaven’s Basement has earned the title of one of the UK’s most promising hard rock acts thanks to their relentless touring schedule and high energy shows. The band has built their reputation on setting Britain’s underground alight with an uncompromising attitude and tireless work ethic. After some line-up changes, they are back and better than ever with Aaron Buchanan on lead vocals. Following the success of their independently released EP, Unbreakable, the band landed a deal with Red Bull Records. They are currently putting the finishing touches on their forthcoming debut album, produced by John Feldmann (The Used, Papa Roach, Black Veil Brides), which is due out in the UK on February 4, 2013.
Last summer, Heaven’s Basement played an unforgettable set for an audience of over 5,000 at the UK’s Download Festival 2012. Their single, “Unbreakable,” was also the theme song for Red Bull’s world-renowned winter series, Crashed Ice 2012, and they performed live at the semi-finals in Sweden. Heaven’s Basement was recently on the road supporting Halestorm throughout the UK and Europe, and they just wrapped up a Canadian tour with Buckcherry.