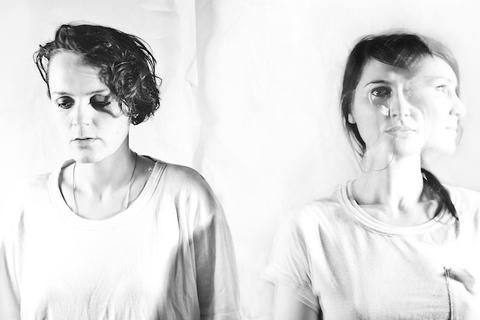 Kool Thing began as the duo of Julie Chance and Jon Dark, originally from Dublin and Sydney, respectively, who met in Paris in 2010 at some side-street dive bar where Chance was DJing. The girls quickly noticed their overlap in musical sensibilities, swapped records, exchanged ideas and booked flights to Berlin, where they got straight to work bringing their new project to life.

Kool Thing’s nocturnal sound weaves together textured washes of guitar, shadowy synthesizers and driving beats with layered vocals that deliver a strong visual narrative. The combination of Jon’s classical musical training and Julie’s artistic vision balances high production values with a tangible handmade quality, like a junkyard jamboree with Teutonic precision. The duo reconciles disparate influences like grunge and wave, prog and pop – yet without any blatant retro fetishism, gazing not down at their shoes but stridently ahead into an ominous future.

The last year has seen the band travelling across Europe playing in London, Paris, Copenhagen, Dublin, Vienna, Prague and all over Germany with renowned artists such as MEN, Light Asylum, Aerea Negrot, Maria Minerva and LCMDF. After initial online buzz and word of mouth about their seductive live performance, AUSTRA hand picked Kool Thing as support act for both their European tours in 2011 and invited them back to tour Australia in 2012. This summer has already seen them share the stage with the likes of Grimes, Lower Dens and New Order to name but a few.

When not on the road, Kool Thing’s efforts have been focused mainly on the studio. Their first official release was a remix of Austra’s single “Beat and the Pulse”, released on 12” by Domino Records in August 2011, this was followed by the release of their own EP "Light Games" via Bandcamp for free download. In June 2012 they released their song "Plan.Life.Go on 12” vinyl with Dublin based label Laser Guided Melodies. Other official remixes have included reworks for Light Asylum (Jan 2012), Telepathe (November 2012) and TRUST (November 2012).

Next plans are to release a full length album in early 2013.