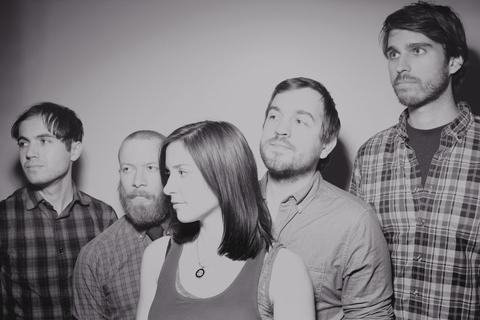 Some day in the not too distant future, America will dip its corners deeper into the ocean, the waves ever grinding at its shores as tectonic plates shift and sink. The effect of melting icecaps on the beaches of her native Long Island is one of the triggers for Laura Stevenson’s worrying mind, as she struggles with the overwhelming notions of an infinite universe and the imminence of her own death. Obsessive musings on these subjects has led her to describe herself as an “unfunny Woody Allen,” though friends and fans might disagree, finding plenty of humor in her introspective and self-deprecating nature. The repetition of these existential questions is the driving force behind Wheel, an album brimming with life and death in the desperate search for what keeps us turning in the face of doubt, an exercise in coming to terms with the overwhelming beauty that can be found in the lack of an answer.

Laura Stevenson was born and raised on Long Island into a family of mariners and music makers. She spent many of her younger days on the sugar barges of NY harbor with her father and uncles, who all made their living on the water, at one time running one of the largest fleets on the Hudson. Meanwhile, her mother’s parents were successful musicians; Harry Simeone, the composer and choral arranger responsible for such works as “The Little Drummer Boy” and “Do You Hear What I Hear?” and Margaret McCravy (stage name McCrae), a singer from South Carolina who got her start accompanying her elder siblings “The McCravy Brothers,” a harmonious gospel folk duo, before continuing on her own to record and tour with bandleader Benny Goodman. Armed with her grandfather’s love for modernist dissonance, a genetic predisposition for harmony, and with her sea legs firmly planted in the traditions of American folk singing, Stevenson began creating melodies at a very young age. “My mom would find me in my room, looking out the window, out at the street, singing by myself, sometimes crying,” she laughs, “I was a weird kid.”

At around five Stevenson began playing piano by ear, and at that point her mother decided lessons were a sound investment for the young musician. In High School between going to punk shows every weekend, she spent her afternoons singing in four different choral groups, exploring a growing love for acapella. “Big time nerd stuff,” as she recalls, lamenting that there wasn’t a show like Glee around to validate her when she was in the thick of it. Hundreds of hours of extra-curricular singing combined with a natural talent has no doubt paid dividends when it comes to Stevenson’s powerful vocals. The confidence and precision with which she unabashedly sings out on record and on stage stands in sharp contrast with the reflective uncertainty and isolation that comes through in her lyrics.

Though Stevenson began writing classically on piano early on, it wasn’t until her late teens that she taught herself how to fingerpick the guitar, aspiring to have the quickness and intricacy of her “guitar god,” Dolly Parton. The new instrument opened up a window of creativity and Stevenson soon began writing songs heavily influenced by the writers her father had raised her on, such as Neil Young, Gram Parsons, and Carole King, while also drawing inspiration from music that she discovered on her own like Leonard Cohen, and Jeff Mangum. Meanwhile, leaving her comfort zone, Stevenson started playing in friends’ bands in and around Long Island, a time that she says, “taught me how to be on tour, how to give and take with other musicians, and not be afraid of my own ideas.” With a new found confidence and a solid and supportive community of creative people behind her, Stevenson moved to Brooklyn in her early 20s and soon started performing her own material, loosely assembling a backing band of friends from other projects. In 2010, she released her bare-bones full-length debut simply entitled, A Record, which she quickly followed the year after with Sit Resist, the first solid document of her work playing with a full band. Those two albums and a healthy amount of touring brought Stevenson a dedicated fan base, drawn to her voice, her words, and her relatable down-to-earth persona.

While writing the 13 songs that make-up her newest record, Wheel, Stevenson sought to understand her place within the frame of time, nature, and among those that she loves. With her words, a careful twine of prose and humor, Stevenson manages to expose the nagging contradictions that make life so terrifying but also so worth living, how it is possible to simultaneously feel both fear and joy, the bitter aftertaste of something so beautiful it makes you sick. Themes of passage, the cycle of the moon, the seasons, and love’s ever-shifting states of dependence, are all interwoven throughout Wheel as songs ebb and flow from her band’s crashing walls of distortion and pounding drums, to sweet string-led overtures, to moments where it is just Stevenson and a guitar.

In recording Wheel, Stevenson decided to up the production value, steering away from the lo-fi approach of her previous two albums. Forcing herself to fully give-in to the recording process, and relinquish some of creative control she enlisted producer, Kevin McMahon, someone whose work she respected immensely and who would, as she put it, “be the perfect set of ears for these songs.” She also brought in Rob Moose on violin and Kelly Pratt to play brass, adding their own layers of depth to the band’s full arrangements. Despite the move to sleeker production, Wheel retains its organic nature, relying primarily on the resonance of acoustic instruments and the electricity of simply over-driven amplifiers, with its most synthetic moment coming from a Roland organ, an unconscious decision that Stevenson explains as her and her band’s way of “being real, relying on each other’s energy to keep time and just playing the songs like human beings, flaws and all.”