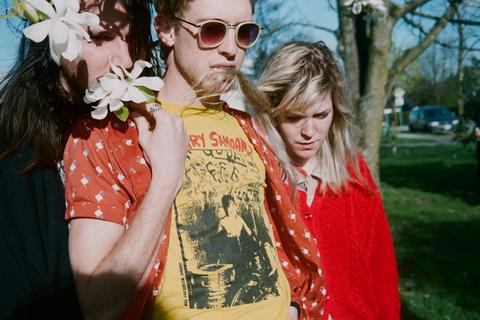 If it was ever true (and it probably wasn’t), that whole idea of a slacker persona existing in the Pacific Northwest has gone stale. Just ask Nü Sensae, the Vancouver-bred punk trio who can’t seem to sit still.

Since forming in 2007 as the core duo of menacing bassist Andrea Lukic and octopus-armed drummer Daniel Pitout, the group has essentially devoured anything that has crossed its path, doing multiple laps around North America and releasing top-shelf DIY punk records that hit the elusive sweet spot between grunge’s most aggressive freakouts and hardcore’s best songwriting.

Years of hard work culminated in 2010’s TV, Death and the Devil, the band’s defining statement that landed them critical acclaim across North America. Rather than rest on their laurels, however, they continued their venomous pursuit of more with more EPs and more touring, satiating their global fanbase with a hand-crafted monthly newsletter sent through the good old-fashioned mail.

Though they’ve proven themselves with a work ethic and quality songwriting to toil away on their own indefinitely, Nü Sensae’s vicious attack caught the attention of Suicide Squeeze’s David Dickenson, who quickly opted to release their sophomore longplayer Sundowning.

Refusing to repeat themselves, however, Lukic and Pitout have taken big risks with even bigger payoffs on this release. Proving just how unpredictable they can be, they abandoned their status as a duo — a favourite angle of both the media and fans — and recruited Vancouver noise rock great Brody McKnight as a full-time member. Previously working with the now-legendary group Mutators, McKnight has added another dimension of heaviness to the band’s already mind-melting sludge attack.

They’ve also embraced diversity in other ways, allowing more loud-quiet dynamics into their songwriting. From the creeping dirge of “Tea Swamp Park” to the vast expanse of “Say What You Are,” the quiet sections offer brief moments of uneasy solace between the full out attack of songs like “100 Shades,” “Tyjna” and “Eat Your Mind.” Elsewhere, subtle but defined melodies surface amidst the fuzz of tracks like “Burnt Masks” and “Dust.” Don’t be mistaken, though: Sundowning is designed to bludgeon with the raw aggression that can only come from the best elements of noise, punk and grunge.

Expertly recorded by former Jackie-O Motherfucker member Josh Stevenson at his Vancouver studio, Sundowning is as engaging, terrifying and addictive as the band’s famous live show. Redefining the sound of punk while respecting and adhering to its hallowed history is no easy task, but then Nü Sensae have never been a band to make easy choices.