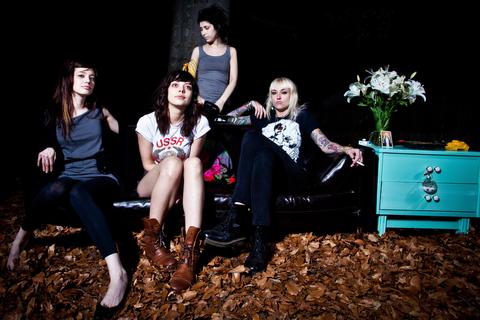 Listen to Merry Go Round

The Coathangers were a band before they were musicians. The Atlanta quartet started out as an excuse to hang out and play parties. Their jokey attitude ran deep, right down to their name—a self-admittedly crude abortion reference for an all-girl group. The whole knowing-how-to-play-an-instrument thing was just a minor hurdle in their musical mission. And to their credit, The Coathangers stormed onto the scene, regardless of the handicap, as a completely unaffected, unpretentious, deliciously sloppy, and totally infectious rock band. What they lacked in formal training they made up for in an innate understanding of how to craft a hook and propel a song forward on sheer charisma. It was impossible not to like them.

Despite the casualness of The Coathangers approach to making music, that devil-may-care attitude and rowdy house-show vibe resonated with folks across the globe. The band released two albums and toured the states with bands like The Thermals, Mika Miko, These Arms Are Snakes, and Young Widows. Five years later, that reckless energy from their half-serious roots is every bit as vibrant and rambunctious on their latest album, Larceny & Old Lace. But this time around we’re hearing a band that’s honed their trade and incorporated more stylistic variations. It’s also the band’s first experience in a proper studio; the album was recorded with Ed Rawls at The Living Room in Atlanta, Georgia. The result is a record that feels like The Coathangers we’ve always known and loved, but sounds like a band taking their trade more seriously. Where their past recordings were a mash-up of garage rock’s rough and loose instrumentation and no-wave’s abrasive tonalities, Larceny & Old Lace showcases a broader song-writing range. “Go Away” taps into a ‘60s girl-group sound. “Call to Nothing” employs the paint-peeling guitars, dance beats, and slightly ominous melodies of the early post-punk pioneers. “Well Alright” is reminiscent of Rolling Stones’ bawdy R&B strut. “Tabbacco Road” is perhaps the biggest leap for the band, completely eschewing their rabble-rousing strategy in favor of penning a pensive and somber ballad. Are we seeing a kinder, gentler Coathangers?

“Never!” is the response from drummer Rusty Coathanger. “We’re definitely in a different place creatively and personally. This album has songs that go deeper than on [sophmore album] Scramble, much more serious for us… say whaaaaa?!” Old fans needn’t worry though—lead single “Hurricane” is still a glorious, gritty garage rocker and “Johnny” is still a brilliantly noisy no-wave tune. The Coathangers are merely stretching their boundaries, as you’d expect any other act on their third album to do. “We wanted to try and write different styles of songs and push ourselves to really create something familiar but still unique,” says Rusty. “Because everyone is into so many different types of music, you get a hodgepodge kind of sound. However different the songs we feel its still a cohesive album, as far as every song sounding distinctly like a Coathanger’s song.”

With this broadened artistic horizon, refinement of technique, and Ed Rawls’ production allowing every instrument to shine without detracting from the band’s natural grit, The Coathangers’ latest offering is easily their best record to date. Larceny & Old Lace will be released on Suicide Squeeze Records. Join the party.