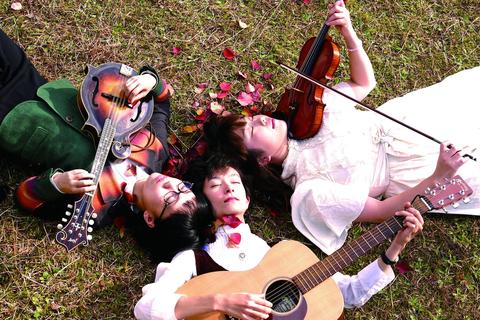 The beginning of Pirates Canoe was when Sara, a Buddhist monk/mandolin player, happened to walk into a baseball bar in the middle of Kyoto, Japan. That’s where she met Kanako, carrying a fiddle case and drinking beer. The very next day, the two heard the singing of Reika in another Kyoto bar. Thus was the band born—Instruments, voice, bars and alcohol.

Although their meeting was fortuitous, the three girls soon found that their musical tastes were eerily similar—bluegrass, Irish, English and American folk, good ole’ roots music. Kyoto is the traditional center of Japan and home to the world’s first manga museum, a true mix of old and modern culture. Yet, these women were more interested in twangy instruments and old ballades than tea ceremonies or anime. Who could blame them if they thought they had found their musical soul mates?

The band’s sound seems to be created from a synergetic effect that’s more than the sum of the parts—Reika’s mellow voice adds sorrow and sweetness, Sara’s eclectic musical sense pushes boundaries, and Kanako’s solid fiddle keeps it all together. They composed new songs based on their love of the old and started playing at bars and cafes in and around Kyoto. They often play as a trio, but also have a “full-band” line-up that includes Kazuhiko (resophonic guitar), Yossie (drums & percussion) and Jun (bass). These are three guys who, amazingly, also love old American folk, soul and pop.

Pirates Canoe didn’t start with the intention of making it big. They only wanted a place to play the music they love, good company, a chance to have a great time together. Anyway, who would expect people to “get” their music, which was so different from the mainstream, or even from tradition? So when their fan base began to grow and they started to get calls from national TV, national radio, and a major corporation like Shiseido, no one was more surprised than the members themselves.

They can’t say they were exactly ready for it, but since it looks like the world is ready for them, they decided to take the challenge. They want to let people know that modern Japan is not only about manga and anime. Japan has a long history of taking in different cultures and making it its own. That’s exactly what happened to the American roots music crowd in Japan—they’ve taken it all in, made it their own, and are now ready to offer it to the rest of the globe.

Pirates Canoe’s music is not an “imitation” of Americana. It is the love of their lives, it comes from their hearts, and it’s not like anything you have ever heard.

- Got together in 2009
- Released their first self-titled EP in 2011
- Released their second EP “Pirates Canoe, Too” in 2012
- Planning on starting their own record label and releasing a full album in December 2012
- Have a monthly show at Coffee House Jittoku, Japan’s oldest live house

Pirates Canoe's leader Sara Kohno grew up at a Buddhist temple in Hiroshima, in an eccentric musical family. Her childhood and adolescent years were spent listening to pop, reggae and musical soundtracks. She later picked up bluegrass mandolin, studying under Katsuyuki Miyazaki, and was welcomed by the Japanese bluegrass community. For several years she played professional in a bass and mandolin pop duo, but then decided to take her career in her own hands. She now applies her diverse musical interests to Pirates Canoe's music.

Lead singer Reika Hunt is a native Arkansan. At age ten she moved with her family to Japan, her mother's native country. She has now called it her home for over 20 years. She inherited a love for American folk/country and learned her first guitar chords from her father. She delights in the subtle sensibilities that her band mates apply to their music and that she believes is key to the band's multicultural sound. She's also the reason why most of the band's lyrics are in English.

Kanako Keyaki is the only band member with a classical background. She studied classical violin from a young age, but as she grew older began to look for an escape from the rigidity of the classical community. This finally led to the Irish fiddle. She then studied under Takehiro Kunugi, one of Japan's top Irish fiddlers, and now is a regular host and player at Irish sessions in Kyoto pubs. Her solid fiddle soars and sighs to lift up and decorate the band's sound.