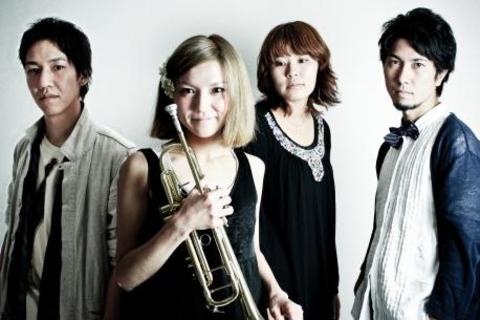 Chihiro Yamazaki + Route 14 Band is the new-generation instrumental group fromed withRoute 14 Band, who have done many works on the music field as producing music and music events, and Chihiro Yamazaki a.k.a anna,who plays trumpet in the well know brass band group over the country "Tokyo Brass Style" have had over 20,000 CD sale during their indie era and now belongs the major label Universal Music.
Their unique sound "Singing Instruments" comes from Jazz, Fusion, Classic, Rock and many other styles. Only a half year after they started the Live performance in 2011, the movie "Rat" witch heroine is Chihiro came out.
They have successfully done their Los Angeles tour on March 2011. And getting a lot of offers, they are going for the U.S. tour again between the end of 2011 and the begining of 2012.
They made it to the final round at the Park Jazz Live Contest in Japan. And also, they have performed in many big events such as Sumida Street Jazz Festival.They are about to release the classic cover album witch band-arranged "The Nutcracker/Tchaikovsky" is in and having a release party at Tenku Theatre with Tokyo Adachi city's back up on Nov. 1st.
Now Chihiro Yamazaki + Route 14 Band is one of the most remarkable band not only in Japan but world wide.