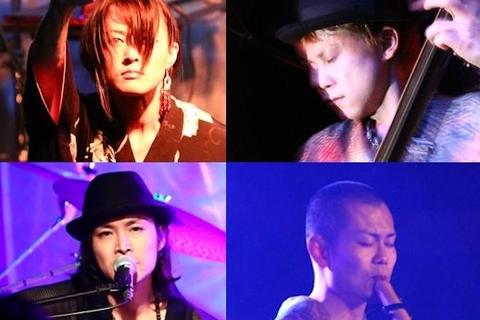 A band from Japan which creates an extremely original performance of beauty, passion. They perform songs with Tsugaru-Syamisen, Shakuhachi, and Acoustic Guitar, twin vocal of man and woman,and Japanese-sword performance by Kaori.Their style is a fusion of Japanese tradition and modern rock music.

Kaori, Jack and Shuji started Kao=S in April 2011 in Tokyo. Kaori Kawabuchi(vocals/sword dancer) is an actress, and a sword performer. She has performed as a motion actor in the FINAL FANTASY Video Game series. Jack is a player of Tsugaru-Syamisen in Rock style and calls himself a Syamisenist. He has performed in many countries, which include North America, Europe and Asia. Shuji Yamagiri(vocal/guitar) is a leader and main songwriter in Kao=S. He plays the acoustic guitar and sings with a wide voice.
Kao=S appeared in [JAPAN NITE] in SXSW 2012 and were credited with much praise from the audience.This success led to their photograph was placed in the SXSW official magazine “SXSWORLD”.
After SXSW2012, Kao=S joined JAPAN NITE and toured in Chicago, New York, San Francisco, Los Angeles, Las Vegas. Shakuhachi player Daisuke Kaminaga joined U.S tour 2012 as a support member (Los Angeles and Las Vegas).After returning in Japan, he joined Kao=S.