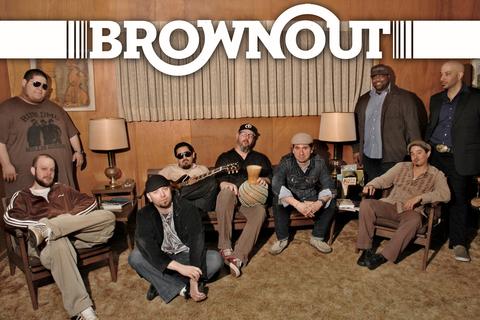 Meet Brownout - the hardest working band in show business today. For those who haven’t yet heard, Brownout has gone from the alter-ego of Austin, Texas’ Grammy award winning Latin ensemble Grupo Fantasma to a full-blown split personality.

For over eight years Brownout has forged its own truly greasy, unparalleled path on the Latin psych-funk frontier. No longer just the little brother to Grupo Fantasma, Brownout has become an independent creature of its own. Imagine if Dr. Jekyll drank the potion and became so damn vicious and demented that he decided to start a new life as Mr. Sexican. Now they’re back with a fresh batch of stick-to-the-roof-of-your-mouth Latin funk with Oozy, their third full-length album and their debut on the Nat Geo Music label.

It’s been just a year since the Grupo Fantasma mothership won its first Grammy, and while most bands would be out celebrating their success, Grupo hit the road with a vengeance, touring almost non-stop for the past year. Yet the ensemble’s members still found time to shift into Brownout mode and hit the studio during whatever downtime they had in between touring. The result of this breakneck creative pace is Brownout’s strongest, most cohesive album yet – a stone groover that taps the vocal and soulful side of this Latin funk machine.

“Brownout has successfully avoided trends and musical movements for close to a decade now, choosing to take the music and sound in our own direction,” says guitarist Adrian Quesada. “Rather than trying to sound like a lost record from 1970s, our analog sound is all our own - big, bombastic and at times psychedelic.”

Brownout’s trademark dual guitars, no nonsense percussion, ensemble vocals and monster horns stay intact, while the funk gets cranked up to 11. Oozy steps away from the group’s Latin roots and delves into more hardcore, gutbucket R&B territory spiked with a dose of psychedelia just for kicks. But old fans needn’t worry – Brownout still kept one foot planted on the Latin side. Think James Brown with a touch of War or The Meters with hints of early Santana.

The title track says it all. “Oozy” is all sweet falsetto vocals and hefty low end as gooey as the melted cheese on a Fatburger. “It started off as a bass line that came to me in the shower,” explains guitarist Beto Martinez. “The title and imagery associated with ooze seemed intriguing to me, and the song type fit into the general push for more funk on this album as opposed to Latin funk specifically. It does, however, feature the Afro-Cuban bata drums which was a first for us as well.”

Other tracks invoke Brownout’s wide array of influences, like “Stormy Weather” which takes cues and insight from War - complete with harp to compliment the horns. “Poor You” was inspired by the drumbeat from the old Kinks song "Strangers” and boasts a mind-expanding mellotron effect. The soulful "What You Did" features vocals from Sonia Moore and Sheree Smith and addresses the group’s lousy treatment by the Recording Academy after their Grammy win as Grupo Fantasma last year.

And if you’re still not clear on the relationship between the two bands, bassist Greg Gonzalez breaks it down: “When Brownout first came together some eight years and four albums ago, we called ourselves the ‘alter ego.’ At this point it's more like a split personality. The bands play completely different repertoires of music in different and varied styles…It's like two separate movies with mostly the same cast. One movie is set in a pan-tropical world, spoken in Spanish with subtitles and the other takes place in a psychedelic Afro-centric reality…same actors but unique plot and context”.

With Oozy, Brownout proves that they’re more than ready to step into the leading role.