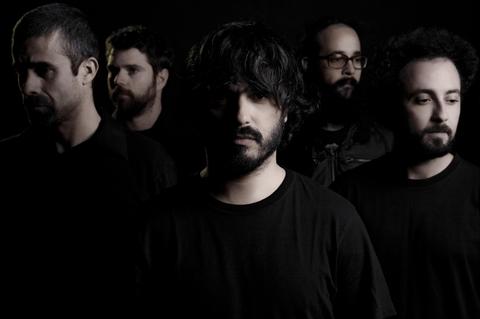 Listen to Song For Tom

"A sign of our times, Marcelo Fruet is difficult to be pigeonholed as an artist. I like to see him as a rocker that makes Brazilian music (or what was once agreed to be called MPB). However, the density and the melancholy of his music also brings me to the Argentine contemporary pop, with a bit of Kevin Johansen - and, back in Brazil, but not too much, exhales the rigorous poetry of Vitor Ramil, runs through Caetano Veloso in his long gone inspired days, and debouches in the MPB pre-bar-soundtrack, which has Lenine as its last stronghold."* Marcelo Ferla - Culture Journalist (Folha /Ilustrada, Rolling Stone, etc), artistic and editorial coordinator of the extinct Rádio Oi FM.

Marcelo Fruet & Os Cozinheiros ’s second album “AIÓN” ( dist.Tratore, label Fruet Music) debuted 22nd November 2012 in the city of Porto Alegre (RS – Brazil) and is now going to be released over the country. The album had an instantaneous repercussion in the media vehicles of the RS, collecting many compliments from well-known public persons and music critics, such as Juarez Fonseca, Júlio Fürst, Roger Lerina, Ruy Carlos Ostterman and Célia Ribeiro. The band barely released it, but it was enough for “AIÓN” to take part in the Best Of The Year 2012’s list, according to Zero Hora (the bigger newspaper publication in south Brazil) and other publications as Embrulhador.com, side by side with big names such as Caetano Veloso, Bob Dylan, Tulipa Ruiz and Leonard Cohen. The Brazilian "AIÓN" tour will passed through Japan and now go to other capitals such as São Paulo (SP), Rio de Janeiro (RJ) , Belo Horizonte (MG) and Curitiba (PR), in 2013.

Marcelo Fruet & Os Cozinheiros’ musical menu dishes up generous portions of MPB - tropicalista flavor - accompanied by a special rocker gravy and takes advantage of the piquant sweetness of jazz for dessert. Concert goers can expect poetic and musical diversity, refined in the right measure to move even those completely unaware of his work. The approximation of southern styles (like tango and milonga) and tropical styles (such as samba and bossa nova), often toying with rock, reveals a contemporary artist that converges subtle musical experiences into interesting aesthetic results.

The band, also formed by Nicola Spolidoro (guitar), Leonardo "Brawl" (bass), André Lucciano (drums) and Lúcio Chachamovich (acoustic guitar), has recorded two albums and performed at festivals in Brazil and abroad. Fruet – who has had a song featured on Big Brother Brasil 7, besides winning four Açorianos Awards (RS State’s most important awards for the Arts) and one award for Best Original Soundtrack at Gramado Festival (Brazil’s main film festival) - was the only artist from Rio Grande do Sul selected to participate in the “Música Pra Todo Mundo Festival, sponsored by Oi Música”. He was also one of the few new artists to join the concert comemorating 30 years of the MPG (“Gaúcha” Popular music, as opposed to Brazilian MPB) movement, alongside renowned “gaúcho” songwriters, such as Bebeto Alves and Nelson Coelho de Castro.