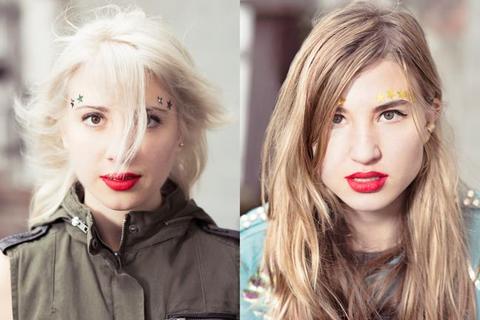 Listen to My Hands

“Everyone are you feeling bad today, ‘cause maybe you should be a little happier,” Asya (“Asy”) Saaverda raps in “Rad,” a song she wrote before hitting her teens, which Cat Power would go on to cover in her live sets. Asy and her younger sister, Chloe, have been making music together since Chloe could hold a drumstick. Under the moniker “Smoosh,” the sisters performed at Lollapalooza (2007) and on Jimmy Kimmel Live! (2006), and have opened for established indie acts such as Eels, Tokyo Police Club, Death Cab for Cutie (whose drummer, Jason McGerr, taught Chloe how to play the drums), and Sufjan Stevens, most of which happened while the two were still in middle and elementary school.

But that is all in the past. “I always wonder if people know who Smoosh is when they talk to us, it’s like our secret identity: ‘Oh, you know,’”Asy tells us. Now 20 and 18, Asy and Chloe are no longer prodigious preteens; they are prodigious young adults with a darker, richer sound, a new band name—Chaos Chaos—and a Kickstarter-funded EP entitled S. - Emma Brown in Interview Magazine