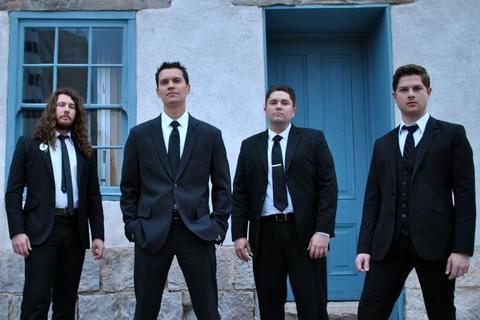 Tesoro has a unique sound that captivates even the most sophisticated Flamenco purists and enthusiasts. With rock, world, and jazz influences, Tesoro takes Flamenco Fusion to a new level.

Having performed live with groups like Del Castillo and Calexico, Tesoro has been fortunate to enjoy such memorable shows. Flamenco dancer Natalie Fernandez performs with the group and has performed with such acts as the Gipsy Kings and Esteban.

Tesoro is a mestizo of many genres of music built around the aggressive yet sensual sounds of flamenco guitars. The band fuses traditional flamenco rhythms with rock, latin, and jazz beats to create an unforgettable sound that you're not soon to forget. Each band member brings unique backgrounds and influences to create something truly special when fused together.Tesoro utilizes cover songs to attract various demographics to the group, and then builds in similar sounds into their original work to create the sound that has made Tesoro so unique.

The group was founded in 2000 by Brian Scott and Justin Fernandez in Tucson, Arizona. The two immediately began experimenting with a mix between Brian's classical guitar and rock styles with Justin's Flamenco background. Fusion rumba styles were created from the onset as they played many shows together in the beginning years. Between Tucson and Phoenix the two had enjoyed much success locally, but desired more for the group's ever-developing sound.

Andrew McClarron, a self-taught bassist from Bermuda, was introduced to the group in 2003 and made his presence known quickly with his amazing abilities to learn and write material, enhancing the sound of the band even more. The bass element added such a unique twist to the flamenco and rock influences that Brian and Justin had already begun intertwining; it seemed like a natural fit. Andrew, a Gipsy Kings, and Mana fan from a young age, immediately brought that energy and precision to Tesoro.

Re-uniting in 2010, Brian, Justin, and Andrew were ready to once again push the limits of original music by fusing even more genres together with unique taste and color. For the very first time vocal arrangements were part of Tesoro. Manuel Iñigo, an accomplished vocalist and percussionist jumped at the opportunity to sing with the band. Manuel’s song-writing capabilities were sharp; his passion unmatched. Manuel added a completely new dimension to the band, adding so much flavor to the music, while also allowing the songs to open up much more. Throughout the years the sound of Tesoro continued to develop. Tesoro released Como en Vivo in 2003, as well as a live album in 2006 and 2011, recorded at 91.3 FM KXCI studios in Tucson, AZ. The group's latest release Live at Hotel Congress release May 2012 received runner-up for Best New Release in Tucson for 2012.

With the addition of Manuel, the group was almost complete. The band was still missing the beat, the backbone of any great Latin/Rock/Fusion band...drums. Andrew sought after Gabriel Kaiser, a well-known drummer in the Tucson area. Gabriel was a perfect fit for the group, with very strong chops, a solid work ethic, and innovative ideas to bring to the table. One of Gabriel's main musical influences is the legendary rock band Led Zeppelin, and when you hear the band perform it is recognizable in the sound he brings to the music. Fresh as could be, Gabriel added the finishing touch on what Tesoro had worked to capture for nearly a decade.

With the sound complete and only great writing years ahead of them, this group is highly energetic and passionate about the music they compose and perform. Each member brings many musical influences that create the special sound that has made Tesoro a must see. Some of Tesoro's major influences include Paco de Lucia, Vicente Amigo, Mana, The Gipsy Kings, Manu Chao, Sargent Garcia, Led Zeppelin, The Buena Vista Social Club, and so many more. Their sound is dynamic, energetic, and romantic.