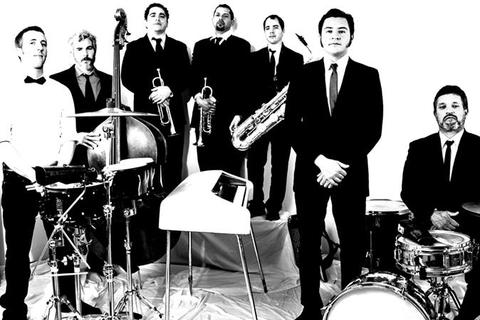 "Sergio Mendoza y la Orkesta continue to surprise me both in the studio and onstage live. "Mambo Mexicano" is the tip of the iceberg of great things to come." -Joey Burns Founder of Calexico/Co-Producer
"Sergio Mendoza is probably my favorite musician of this time. He has the cumbia and mambo in his DNA, but he has the power to make it sound like today.
His Orkestra is as punk as the Sex Pistols and as violent as Perez Prado."
- Camilo Lara of Mexican Institute of Sound
"If I had a son... I would want that son to be a musical genius, not unlike a certain dark haired, handsome lad from Tucson I know. The one that plays guitar like a prince, the piano like a king, accordion, percussion and all other instruments like some sort of sub-diety, and the vihuela...
like a God. His name would be... SERGIO MENDOZA!"
- Tom Hagerman of Devotchka

Tucson, AZ- Most likely most of us haven't heard the term "Indie Mambo" to describe music before now, because such a style simply did not exist until. Sergio Mendoza not only invented it but coined the phrase in late 2009, in Tucson, Arizona. Mendoza was participating in an annual benefit event held at the world famous Club Congress, called 'The Great Cover-Up,' and had chosen the legendary Cuban bandleader Perez Prado as his coveree, as rules of the event dictated. But combining that influence, as well as Cumbia and other Latin styles, with psychedelia-tinged rock music proved to be a formula that was a winner from the outset. Their debut studio album Mambo Mexicano is OUT NOW (Cosmica Records) and is the end-result of what has been a wild ride and musically a lot of fun.

Duncan Hudson, Music Director from KXCI (Tucson, AZ) comments- "Y La Orkesta does for mambo what the Daptones did for soul, respect and build upon the spirit of a tradition while incorporating a contemporary sound and audience...Sergio Mendoza, a long time collaborator and sideman with Calexico, Devotchka and a host local and international artists (is) considered the pride of Tucson...."

Mendoza and the band have logged in a lot of frequent flier miles recently. Whether it has been criss crossing the globe with Calexico or going down to Mexico City to back up Camilo Lara and his Mexican Institute of Sound (in a head turning performance at Vive Latino), or doing a month long tour in Europe- the band has never sounded better on the road or on record.

Sergio can be seen and heard on the road the rest of 2012 performing with Calexico interspersed with SM Y La Orkesta shows with 2013 as the focal point for the Orkesta hitting the road on their own.