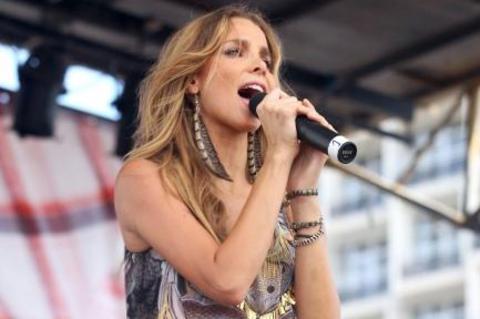 Listen to Into Your Heart

“You only choose from what you could get, your life is a show and the star's nearly dead”-
We all make choices in our life, but in the end, all roads seem to lead to one eventual truth; Sarai knew she was a musician the first moment she sat down at the piano as a kid- and while taking many different paths artistically over the years, her music became the one truth that she couldn't go without- to capture this notion, Sarai Givaty chose the cover art of her debut EP “The Monkey's Are Here” taken of her first piano recital at the tender age of 9.

It was only while she was shooting a video with Enrique Iglesias for the single “Somebody's Me”- directed by the epic music video icon Anthony Mandler (Rihanna, Lana Del Rey, Killers), he heard Sarai pounding out some tunes on an old upright piano in between scenes; one might say that her quintessential “moment of discovery” came when Mandler immediately identified her unique and melancholy voice and insisted that she record a few demo's- and even put a band together for her, himself. “It was pretty seamless” Givaty recalls, sitting in the studio working on her follow album, to debut EP “The Monkey's Are Here” (Sarai's first self-styled offering as both songwriter and producer) released in October, 2012. “I decided to pull the trigger, and take a more 'professional' approach to my music. My first record is a collection of songs, kinda an introspective, pretty much. acknowledging the darkness, my fears, by digging into my wounds- the stuff nobody likes to talk about at cocktail party's- I guess” she states matter-of-factly with a playful smile.

Her music is decidedly a crescendo for the Israeli born talent; although she's been a household name for nearly a decade, credited for her featured roles in American film & television series including NCIS, CSI, My Own Worst Enemy etc., and as a so-called femme' fatal model, gracing fashion/lifestyle covers and magazines around the world, not to mention an accomplished visual artist-showcasing her critically acclaimed paintings entitled “Privacy” at over 40 galleries in almost as many cities- (Paris, London, Miami, New York, LA etc.)

Givaty's first single, “Into You Heart” which was released in the summer of 2012, has quickly amassed a strong following worldwide, with nearly a quarter of a million views on youtube alone in only a few months. Sarai Givaty's soft and melancholic voice tears through the track, showing a unique & vulnerable perspective of a young woman staring madness in the eyes, and deciding to embrace the voices in her head on a path to personal freedom.

“The Monkey's Are Here” offers fans and critics a small taste of this multi-talented musician, with songs including “Guns”, “Paris” and her forthcoming single, “Losing”- The fact that Givaty has already been noticed by the music industry is no surprise, having been tapped to collaborate on various projects with the likes of renown film composer, Michael Wandmacher (Bloody Valentine, Drive Angry etc.) for the upcoming major motion hollywood film, as the title track, The Haunting in Georgia-”When You're Dreaming” as well as her hit song “Can You Hear Me” appearing in the SIMS 3 Supernatural (Video Game) along side the likes of Katy Perry, Lily Allan and others.

Sarai Givaty will be releasing her EP “The Monkeys Are Here” internationally soon, and plans to tour in Europe & North America as early as spring 2013, while also she prepares new material in order to go back into the studio for her follow up LP (yet to be titled).