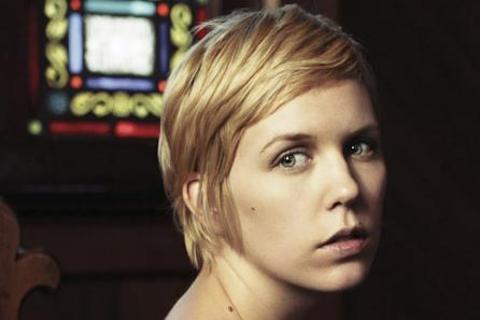 Nonesuch Records releases How I Knew Her—the label debut from Nataly Dawn, the California-based singer/songwriter of the duo Pomplamoose—on February 12, 2013. The album—comprising 12 autobiographical, introspective songs by Dawn—was produced by her longtime partner Jack Conte and recorded with a group of accomplished musicians at Prairie Sun Studios in Cotati, CA, where many of her favorite Tom Waits albums had been made.
The daughter of missionaries, Dawn spent much of her childhood in Europe where she attended Lycées Français in France and Belgium before returning to the U.S. to study art and French literature at Stanford University. It was there that she met Conte and formed Pomplamoose, eventually performing, recording, and editing songs and videos entirely on their own in their Northern California home. Their first upload to YouTube was an original collaboration, “Hail Mary,” which was featured on the YouTube homepage. In 2010 the duo began releasing creative covers of pop songs such as Beyoncé’s “Single Ladies” and Lady Gaga’s “Telephone” which grew their fanbase even further. Pomplamoose played 20 live dates in 2011 to sold-out audiences across the U.S.
In 2010 Pomplamoose released its first compilation of original songs with lyrics by Dawn entitled Pomplamoose VideoSongs, as well as an album of covers titled Tribute to Famous People. That same year, the duo also released The Holiday EP, in conjunction with Amazon.com, as an incentive for a charity book drive, raising more than $130,000 in books for the Richmond, CA school system. Pomplamoose’s music can also be heard in a series of national television spots for Hyundai and Toyota. Nataly Dawn’s previous solo album, 2009’s Her Earlier Stuff, was a compilation of twelve songs that she had put up on YouTube over the course of the previous two years.
continued
For more information, please contact
Samantha Tillman or Carla Sacks at Sacks & Co., 212.741.1000, samantha.tillman@sacksco.com or carla@sacksco.com.
 How I Knew Her was recorded in one room with a full band that included Ryan Lerman (Ben Folds, A Fine Frenzy) on electric guitar, mandolin, banjo, and acoustic guitar; David Piltch (k.d. lang, Bill Frisell, Bonnie Raitt) on upright bass; Louis Cole (Louis and Genevieve, Pomplamoose); and Matt Chamberlain (Brad Mehldau, Fiona Apple, Tori Amos, Jon Brion) on drums. Oz Fritz engineered the album with Conte; the album was then mixed by Mike Mogis and mastered by Bob Ludwig. The recording sessions were filmed and will periodically be released as companion videos; two, for the songs “Leslie” and “Araceli,” are already viewable on Dawn’s YouTube channel. Before coming to Nonesuch, Dawn raised more than $100,000 via Kickstarter to make How I Knew Her.
 
 How I Knew Her Track Listing
1. Araceli
2. Leslie
3. How I Knew Her
4. Back to the Barracks
5. Long Running Joke
6. Counting Down
7. Please Don't Scream
8. Still a Believer
9. Even Steven
10. Caroline
11. Why Did You Marry
12. I Just Wanted You to Get Old