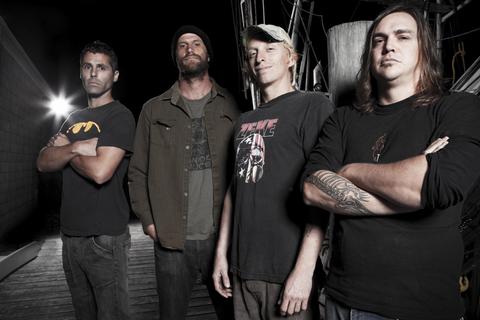 Formed in the North Carolina coastline community of Wrightsville Beach in 2001, the riff-fueled, distortion-driven rock of ASG that can be found on their latest effort has actually been at the band's core since its inception.
Initially forming as a three-piece instrumental project, due to the lack of a dedicated vocalist, ASG were intensely focusing on devising tight, driving guitar riffs, locking guitarist Jason Shi in with the rhythm section of bassist Andy Ellis and drummer Scott Key.
But as time passed and no vocalist was found, Shi was eventually forced to step up to the mic.
With Shi becoming more comfortable as a frontman, the group found themselves connecting with Volcom Entertainment, who signed the band and put them in the studio in 2003, to record their debut album, ...The Amplification of Self Gratification.
In 2005 ASG found themselves in a proper studio with proper producers, Matt Hyde and Phil Caivano, recording their sophomore album, Feeling Good Is Good Enough, an album that summoned all the band's potential and spawned a thunderous hard rock creation that equaled what the band had been working towards for the past 3 years.
Shortly after completing Feeling Good Is Good Enough, second guitarist, Jonah Citty, was added to help recreate the album's sounds live, which was none too soon as the band quickly found themselves on the road with the likes of The Sword, Torche, Dwarves, and CKY.
In June 2007 ASG returned to Los Angeles to record their fourth album, entitled Win Us Over, with Matt Hyde again.
Win Us Over, is a vivid, psychedelic, and panoramic thrust that is just as much for the ears as it is for the aura; an experience

In late 2011, Relapse Records announced the signing of North Carolina’s finest psychedelic, stoner-punks ASG! Impossible to pigeonhole, ASG has been wheelin’ and dealin’ in kick-ass rock n’ roll since forming in 2001. The band has previously released four albums with including their most recent, critically acclaimed effort Win Us Over in 2007. ASG has gained a reputation for their wildly energetic live shows, and has found themselves on the road with heavy-hitters Motorhead, The Sword, CKY, Fu Manchu, Torche and The Dwarves among others.

ASG plan to enter the studio in February 2012 to record their highly anticipated Relapse debut with producer Matt Hyde (Slayer, Children of Bodom, Fu Manchu). Additionally, the band has confirmed a string of Southern U.S. Dates in January plus a special appearance at next year’s Hellfest in France.