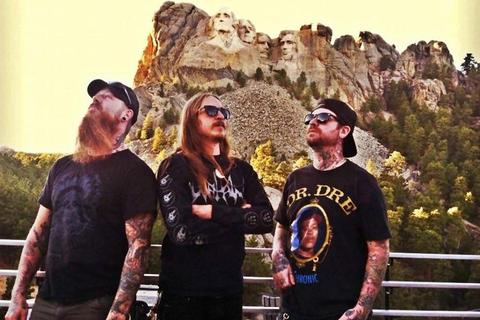 Listen to Set The Dial To Your Doom

Formed in 2005, on a solitary street in the heat of Savannah, GA, Black Tusk is a ferocious heavy metal trio comprised of Andrew Fidler, Jonathan Athon, and James May. Their mutual residence in Savannah was not the only immediate connection between these musicians – they soon found that the colossal noise they created together was a raucous and innovative addition to the south’s esteemed legacy of head-banging, jaw-dropping, blood-boiling heavy metal. Combining sludgy stoner riffs with punk rhythms and elements of thrash, Black Tusk creates what Spin.com calls “a frightening blast of hellfire” and a style of music that defies categorization. It simply demands your attention.
In the band members’ own words, Black Tusk’s sound can be best described as “swamp metal,” pursuing the humid murkiness of sludge metal into deeper and darker terrain. This style was instantly evident on the band’s 2007 debut, The Fallen Kingdom, which they self-released, as well as 2008’s Passing through Purgatory, released on Hyperrealist Records.

In November 2009, the band signed to Relapse Records and crafted their breakthrough record, Taste the Sin, released in 2010 and featuring beautiful artwork from John Dyer Baizley, frontman of Black Tusk labelmates and aesthetic brethren Baroness. Taste the Sin attracted both a strong cult following for Black Tusk as well as critical adoration, hailing it as one of the top metal albums of the year. Pitchfork Media called the album “the rare crossover record that works to capitalize on the immediacy of its chosen genres and not to bend them into obscurity.” Meanwhile, fans lauded the album’s progression from Black Tusk’s beginnings as well as its unique, blistering sonic assault.
Since then, Black Tusk has toured the globe extensively and garnered a reputation as one of the most exciting live acts in the metal scene. Black Tusk’s intense musicianship as well as the shared vocal duties by each member of the band makes for a truly fascinating display of talent that BrooklynVegan calls “mind-blowingly fun.” Having performed shows with bands such as Pentagram Down, Weedeater, High on Fire, Red Fang, Eyehategod, Tombs, Municipal Waste, and 3 Inches of Blood, Black Tusk have placed themselves right at the top of the pile of today’s most talked-about metal bands and have proven themselves to be fully capable of holding their own within the context of several decades of heavy music. Additionally, Black Tusk has had the honor of performing at Scion Festival as well as Metallica’s Orion Festival in June 2012.

Now, having released four full-length albums, Black Tusk seems like a band that is only getting started. As they tour the world in support of 2011’s Set the Dial – their second full-length on Relapse – Black Tusk is bringing their sound to a constantly growing audience as their music evolves into uncharted territory. At this point, there is no stopping them.