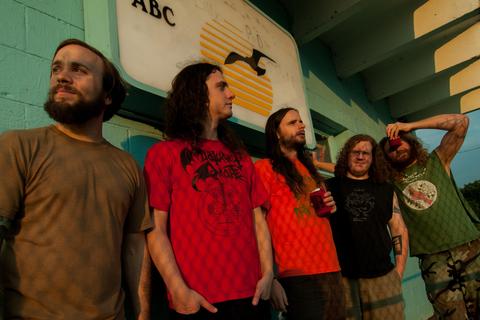 Formed in 2006, Inter Arma is one of the most talked about heavy bands to come out of Richmond, VA . The group (consisting of T.J. Childers - Drums, Steven Russell - Guitars, Trey Dalton - Guitars, Mike Paparo - Vocals, Joe Kerkes - Bass) formed in 2006 and released their crushing debut full-length Sundown via Forcefield Records in 2010 to much critical acclaim. Combining a punk rock ethos with an esoteric blend of psychedelia, black metal, and doom/sludge, the quintet quickly developed a name for themselves in the underground through relentless touring and mesmerizing live performances. After Sundown's release, Inter Arma began a rigorous DIY touring schedule, playing shows with bands like Cough, Krallice, Mutant Supremacy, Castevet, Royal Thunder, Ken Mode, The Body, Hull, Batillus, Black Breath and many more.

In 2012, the band released a 12" EP entitled Destroyer via Toxic Assets Records. Based on the strength of this EP they immediately signed to Relapse Records and embarked on a self-booked month long tour. The band excitedly commented “It's pretty crazy to think that we'll be tacitly associated with bands like Neurosis, Amorphis, Human Remains, diSEMBOWELMENT, The Dillinger Escape Plan, Incantation, Mastodon, et al. That's a pretty high standard to hold yourself to, but we'll give it our damndest.” Expect Inter Arma to deliver on their promise. Their next album, set for an early 2013 release with Relapse, is sure to be their most challenging, devastating release yet.