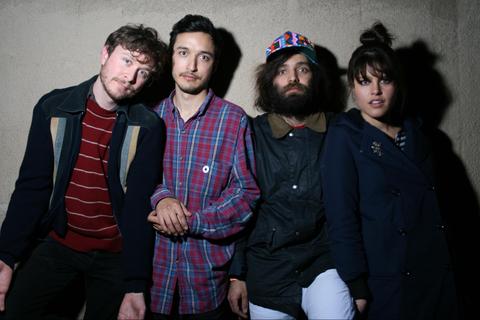 Listen to Lose Your Mind

So Many Wizards, a dynamic four piece from Los Angeles, has been causing a stir with furious live performances and a sound that Aquarium Drunkard describes as an “enigmatic blend of pop, rock, ballads, and zany nuggets” that come together to form “a cohesive whole.” The band started as the solo project of Nima Kazerouni, who crafted the first So Many Wizards songs to cope with his anxiety after a childhood that began with an escape from war-torn Iran and took him through Europe, South America, and a month in the ghettos of Kingston, Jamaica before landing him in LA. On the strength of his debut EP, Tree,Kazerouni found a community of musicians at famed underground venues like the Smell and Pehrspace and recruited a band of scene veterans including Erik Felix, Geoff Geis, and Frank Maston. As a four-piece, the band has become a centerpiece of LA’s vibrant DIY scene, recently representing the “new class” at the Smell’s sold out 14th Anniversary show with Best Coast and Abe Vigoda. A staple of Southern California college radio since the 2009 release of “Fly a Kite,” So Many Wizards earned airplay on BBC 1 with the 2011 single “Inner City” and was subsequently invited to tour the UK in March of 2012. The band released critically acclaimed debut LP “Warm Nothing” on JAXART Records August of 2012. The band is currently touring in support of "Warm Nothing" while working on the follow up sophomore release out later in 2013.