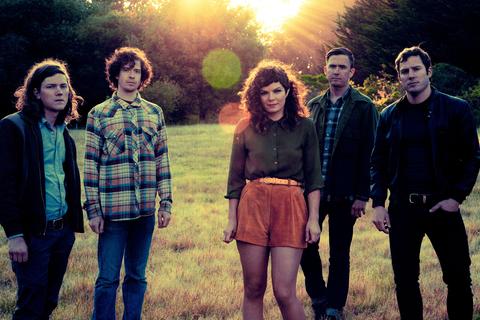 Naming their sophomore album Developer is a bold move for the still-young band Social Studies. But it is as apt a descriptor as you're likely to find for how the sound of this San Francisco-based five-piece has flourished, matured, and, yes, developed over the past two years.
The band - led by Natalia Rogovin (vocals, keys) and Michael Jirkovsky (drums), who were joined in 2009 by bassist Jesse Hudson and guitarist Tom Smith and this year by second guitarist Ben McClintock - has already won a loyal fan base thanks to their arch take on modernist pop as heard on 2010 release Wind Up Wooden Heart. Social Studies has become a force to be reckoned with in concert as well, transfixing audiences at the CMJ Music Festival, SXSW, and Noise Pop, and bringing their unique energy and spirit to stages shared with tUnE-yArDs, Wye Oak, Lotus Plaza, Thee Oh Sees, Dodos, Dungen, and Au Revoir Simone just to name a few.
Now, on their new album, the goal was to strip things down to the basics, straighten out some of the more jagged lines of their previous work, and put the focus more on texture and mood.
“Before, we were rebellious. We fucked with things just because we wanted to push limits and boundaries," says Rogovin. "Developer is a more adult record. We tried to explore sounds and draw out parts to write more moving and focused songs."
They enlisted the able ears and hands of engineer and co-producer Eli Crews (tUnE- yArDs, Deerhoof, Thao & Mirah) who helped hone this new barebones attack as well as reflect the excitement of their live show.
On Developer, all the pieces have come together perfectly. The clear-eyed production helps bring out the dark, sexy heart of these ruminations on life, love, pain, and pleasure. The themes of the album are as complex as the songs are streamlined.
"The album is about art, but it's also a cinematic exploration of those turning points in life that you didn't see coming and didn't realize were important until much later," says Rogovin.
Lead single Terracur calls the bluff of a headstrong friend threatening to leave in the middle of a torrid situation, while Away For the Weekend turns the tables to justify a depar- ture: “Ever discover another that makes you feel good, you always feel right/ the notion of fleeing the corporeal being/Just run to your other life.”
In Developer, Social Studies has succeeded in evoking a set of feelings and emotions that will linger with listeners long after the last notes have faded away. Warm, cold, or down- right chilling, there is a connection between the personal and universal that the band taps into through a set of fearless, powerful and gripping songs.