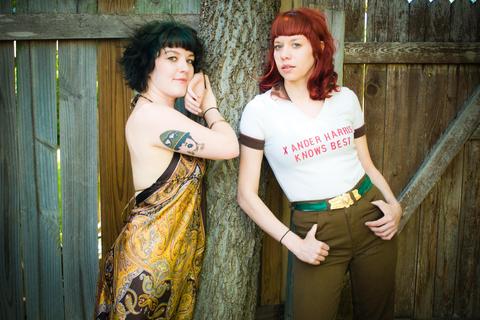 Agent Ribbons isn't just a band--it's a tree house club of post-feminist dreamers trying to find their place in the scheme of things, like a hand-sewn and lovingly-crafted garment in a modern, disposable world. Listening to everything from Eartha Kitt to the Velvet Underground and taking notes from bands like the Shaggs, the Boswell Sisters and the Zombies, they miraculously reconcile seemingly-unrelated genres, sounding something like Girls in the Garage doing the Three Penny Opera. Waxing sentimental over the eerie beauty of all things lost to time, the emphasis is undoubtedly in the lyrics, which favor clever turns of phrase and occasional humor, but never at the expense of the melodic integrity of their catchy, memorable songs.
Originally hailing from the shanty-Victorian streets of downtown Sacramento, Agent Ribbons moved to Austin, TX in 2010, their new home base when they aren't traveling the world and jamming econo. After a brief expansion to a 3 piece for the recording of their second album that year, the band quickly returned to their original two-piece lineup of Natalie Ribbons: Guitar & Vocals and Lauren Ribbons: Drums & Vocals. All the better to catch crowds off-guard with their live rawness, with the band bringing both an honest minimalism and unapologetic theatricality to their live shows.
Since 2007 and the self-release of their first album, On Time Travel and Romance, the band has toured the U.S. more times than they can remember. Some of those tours were with big national acts like Camera Obscura, Cake, Detroit Cobras and Girl in a Coma, and the rest were done vigilante-style in a Chevy Astro. And despite having been banned in the UK in 2008, they have an ever-increasing presence in Europe with numerous tours and releases via Spain’s Acuarela Discos label under their belts.
The release of their second full length, Chateau Crone via Oakland’s Antenna Farm records in late 2010 was a breakthrough for Agent Ribbons. Baroque string arrangements ran up against a garage pop sensibility for a cleverly melodic and unique sound that was praised by Vice for its “impeccable taste” and by NPR as “Feel-good garage rock.” Bust magazine gushed that “Agent Ribbons is the band of your dreams...a truckload of genius harmonies and a lead singer with a voice that could call down the ghost of Johnny Ray." 2011 saw numerous high-profile TV and movie placements for songs from the album, including the shows Vampire Diaries, Revenge, and Cougartown.
Flash forward to 2012, and the band has a new EP, Let Them Talk, as a teaser to a third full-length LP, coming in 2013. Let Them Talk is a return to the band’s rawer early recordings, with classic Spector-esque stacked girl-group harmonies balancing on top of a raucous rock foundation. Standout track Family Haircut rides a complex and dark minor key melody before riding out on a triumphant harmony line, while the nonchalant opening line of Let Them Talk (“I wanted to keep your baby but I couldn’t look away from the thing that held my gaze”) shows the band hasn’t lost their taste for black humor.
Let Them Talk releases on September 11th 2012 via Antenna Farm Records as a 5 song digital EP and limited run 3 song 7” featuring a bonus cut not on the digital version. Cassette fans can also find the songs via Portland’s Cassingle And Loving It, who are releasing the EP under the title Family Haircut in an instantly collectable run of 300 cassettes.