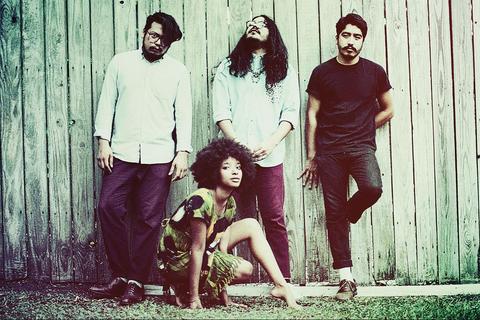 The Tontons don't have a readily available mainstream band to make an off-the-cuff comparison to. Soul? Pop? Rock? Indie? You decide. In this space, we won't be able to tell you how they sound like the unholy offspring of your favorite Indie Flavor Of The Week or an Appropriately Hip Classic Rock Act. The Tontons simply sound like the Tontons. Everyone in Houston, their native land, knows it, too. If Houston has now become the new gold standard of American cool, consider the Tontons it's house band.

Up front is Asli Omar, whose old-soul vocals have been known to make all sexes quiver. Flanking her is bassist Tom Nguyen, armed with a nimble rumble that forms the sturdy dermis of the band. Adam and Justin Martinez's titanic guitar-and-drum attack are the dance-ready glue. Omar's voice seems to melt like butter into the cracks of the Earth that the foursome create.

Relentlessly gigging -- we've seen them in concert halls, dives, and festival stages of all sizes -- the band has given the world a sweaty hug, leaving a trail of smiles and sore hips from shaking in their wake.

A band since 2007, The Tontons will be delivering a new full-length this spring, following a series of singles that have made jaded music junkies actually push repeat for a change, which is no small feat here in the 21st century. This promising new offering was produced and mixed by Dave Boyle of Austin's Church House Studios, who has twisted knobs for fellow Texas acts Black Joe Lewis and Okkervill River, plus golden god Robert Plant, who got to Texas as quick as he could.