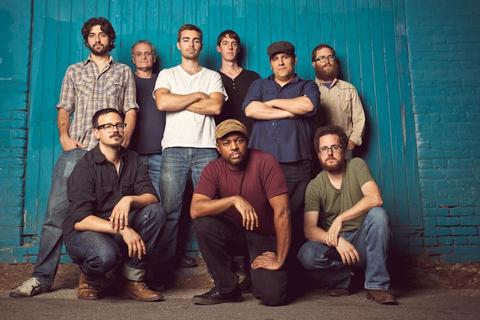 Listen to Trickle Down

The Austin-based nine-piece collective of musicians known as Hard Proof are the sole purveyors of African funk in the state of Texas. They don’t just play Afrobeat per se, but funk and jazz music from and inspired by the whole of sub-Saharan Africa.

The band started almost on a dare, and a proclamation that they would convene every Sunday morning until an album had been written. After about a year a lineup had materialized featuring members of Black Joe Lewis and the Honeybears, The Calm Blue Sea, Cougar, Ocote Soul Sounds, the Echocentrics, and several other notable Austin acts.

In addition to quickly building a strong reputation of kinetic and incendiary live shows, the band recorded a 4 song demo in November of 2008 at East Austin’s Cacophony Studio. Fall of 2010 saw the release of their 15 song debut garnering a rare 3.5 star review in the Austin Chronicle:
"From the dark psychedelic marauding of "Stolen Goods" to the Ethiopique groove of "Jimma," Hard Proof crafts moody instrumentals that lean more toward Budos Band than Antibalas. A rumbling baritone sax churns the hypnotizing crawl of "Mahout," while the brass (which splits time with Black Joe Lewis & the Honeybears) blows hard on "No Consideration" and freaks out on "M.E.N.D." The best of the band's brooding grooves border prove Afrobeat is alive in Austin. This debut is Hard Proof."
http://www.austinchronicle.com/music/2010-11-19/hard-proof/

While the album was well received, there seems to be universal agreement that their live shows are something not to be missed. Austin taste-maker Laurie Gallardo of KUT radio may have put it best: “This local nine-piece ensemble always puts on an electrifying live show, an absolute blowout of non-stop percussion action and blasting brass, bringing the best of both worlds to the stage by mixing classic styles and plenty of their personal panache to own the show.”

In 2013, Hard Proof released their first 45rpm vinyl single on Kept Records of Canada. Tracks Dragon and Tere were produced by Adrian Quesada of Grupo Fantasma and Brownout.

Plans for Hard Proof in 2013-2014 include hitting the road to play select festivals, and to track a 12" single with Spoon's Jim Eno at Public Hifi studio to be released on his label of the same name. Hard Proof is primed to bring their singular take on sub-Saharan funk to bigger stages in Austin and the world at large.