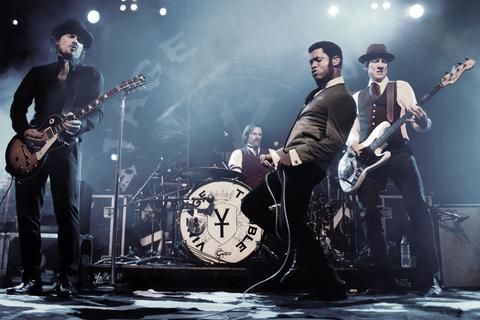 Vintage Trouble formed in 2010 out of the ashes of a few other bands, and not by chance, Ty Taylor (vocal) and Nalle Colt (guitar) teamed up with drummer Richard Danielson and bassist Rick Barrio Dill. They entered The Bomb Shelter Studio, recorded an album's worth of material in three days, which was intended to be demos and ended up being pressed into CDs. The Bomb Shelter Sessions became Vintage Trouble’s first album. Selling it at their gigs was easy and not surprisingly so were the calls to feature their music in several commercial media.

With a unified decision to stay in Los Angeles to build their musical foundation as a band, weekly residences in the area lead to a large assembly of fans in a short amount of time. These fans became known as the "TroubleMakers." It was that underground buzz that lead to legendary manager Doc McGhee taking notice and signing Vintage Trouble to his roster after hearing only a single chorus. Doc's first order of business became breaking the band in England, right away. Their first venture overseas resulted in a similar groundswell with Music Weekly naming them 2011 Breakout Artist of the Year and HMV hailing them as their "Next Big Thing.”

Their return to the U.S. and Harvelle's was nothing short of epic, with a line forming down the block before the club even opened. Vintage Trouble felt the homecoming as a true testament to their fans’ dedication at spreading the word and sharing their music. The crowd inside was just as amped; young and old, newbies and old faithful, all anticipating the transference of energy from the band to their soles. Vintage Trouble didn't disappoint. The next day the band would be on a plane back to London to appear on Later… with Jools Holland. This performance was one of the most talked about of the year, blowing up Twitter as the 6th most tweeted topic worldwide just hours after the show. The very next day, their self-released debut, The Bomb Shelter Sessions entered the charts, becoming the No. 1 "R&B Album" and No. 2 "Rock Album" on Amazon UK—No. 6 on Amazon overall and No. 13 on iTunes, charting in the "UK Top 40" by the time it was officially released in July.

The band went on to play 80 shows in 100 days in front of an estimated 400,000 people throughout the UK and Germany. The next three months brought them an opportunity playing theaters, opening for Brian May's Anthems Tour, and then as the support for Bon Jovi in stadiums and arenas on the UK, Ireland and German legs of the tour, playing to over 200,000 people in just under two weeks—all the while headlining smaller venues, after-hours clubs, and pubs. Guitarist Magazine ran a feature about Nalle, and The Bomb Shelter Sessions was named one of the "Top 25 Guitar Albums of the Year” by Total Guitar Magazine. They won the Classic Rock Award for "Best New Band of 2011"—an honor that German Music Magazine would also bestow upon them.

Things exploded around their penultimate show in Glasgow. The demand for tickets was so great that they were bumped up from a 500 seat venue to play for over 800 freshly converted “TroubleMakers.” Ty was invited to front Queen for Freddie Mercury's 65th birthday celebration in London, setting the stage for Vintage Trouble to embark on their third overseas tour, with destinations including Italy, Germany, Paris, Belgium, and the Netherlands. They played Hyde Park Main Stage twice in eight days (The Wireless Festival and Hard Rock Calling). They were featured on Sky News, recorded an MTV The Studio Sessions with Tony Visconti, in addition to 17 live radio sessions throughout the tour, including Radio 2- Janice Long, 6 Music With Craig Charles, Q Radio, BBC Radio London and BBC Radio Scotland.

2012 proved to be just as busy. The band sold out The Troubadour in Los Angeles and took up residencies at both The Cosmopolitan and Hard Rock Hotels in Las Vegas. Their first video "Nancy Lee," filmed entirely with an iPhone, won at the Original iPhone Film Fest, not just taking the Music Video category, but the festival's grand prize as well. In February, Google Music selected Vintage Trouble as the featured artist at Sundance where their live performance rocked the film community and they made their first appearance in Rolling Stone. Their too-brief Australian tour included the Sydney Festival and the Australian Film Awards and was met with such an overwhelming response that a return trip is guaranteed sooner rather than later. Vintage Trouble’s SXSW showcase in Austin was named "the fourth best live performance of the festival" by Paste Magazine (only behind The Jesus and Mary Chain, Jack White and Bruce Springsteen). In celebration of the official U.S. release of The Bomb Shelter Sessions, Best Buy also featured Vintage Trouble on their TV screens in stores nationwide.

The release of The Bomb Shelter Sessions, combined with their electric live show has catapulted Vintage Trouble into the US limelight, earning them a sponsorship by Supercuts, an iTunes rock download of the week for new song “Pelvis Pusher,” along with praise from NPR, Rolling Stone, The Wall Street Journal and Billboard for what The New York Times raves, "Like Otis Redding, Vintage Trouble makes music that is a little bit of everything ... You can slow dance, groove, rock and let it all go."

Vintage Trouble is currently on a world tour that has already seen them open for Lenny Kravitz, The Cranberries, Joss Stone and recently, The Who. Their world tour continues in 2013 with performances at Coachella, Glastonbury and Rock In Rio, a Japanese headlining run and The Who’s European Tour. The band will open for The Rolling Stones at Hyde Park in London this July, and will return to the US for a headlining tour in August.

Vintage Trouble’s Ty Taylor, Nalle Colt, Richard Danielson and Rick Barrio Dill together form a quartet of sincere musicians whose combination of hard work, talent, and luck are undoubtedly going to take them right where they deserve to be: on our radios, in our cars, our headphones, our televisions, at the venues where we go to see our favorite bands and on the soundtrack of our favorite moments in life.