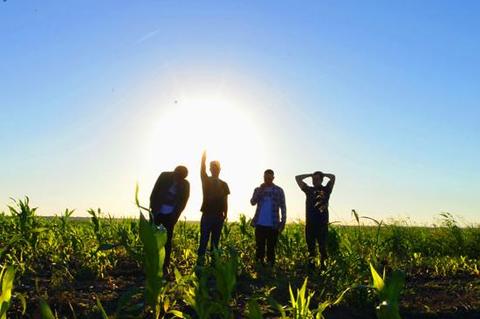 Blurring the lines between pop rock, hardcore, ambient, and punk, Thieves has been crafting anthemic sing-alongs since 2009. Having sweated all over 32 of the 48 contiguous United States (and Vancouver, BC) with no label support, the band hasn’t stopped proving their work ethic.
In 2009, Thieves released a self stamped four song demo that they spread as far as they could in between school schedules. After building a solid regional fanbase and beginning to sell out shows in Austin, TX, they teamed up with The Vagabond Collective to release their debut full length, Just Give It Up.
On May 13, 2011, the band released the album at a sold out headlining show on the inside stage of the legendary Stubbs BBQ in Austin, TX. Several tours to support the album followed, including a four week stint supporting With The Punches (Doghouse Records) and Carridale (Panic Records).
The success of Just Give It Up gained the attention of Transmission Entertainment who invited the band to play Fun Fun Fun Fest in 2011.
In 2012, Thieves won the Ernie Ball Battle Of The Bands, landing them a spot on the San Antonio date of the Vans Warped Tour. The band shot two videos for their full length and continued touring to support the record while conceiving their follow up album, the Achiever EP.
On July 25th, Alternative Press Magazine premiered a new track from the album and posted an interview with Thieves. The band released the album on July 28th, 2012 to a capacity crowd on the outside stage of The Gypsy Lounge in East Austin. Typical to the band’s style, the seamless 28 minute concept record is filled with surprises including prevalent tempo changes, thrashy guitar solos, jazz sections, and ambient pieces.
The album received great critical reviews and Absolutepunk.net named Thieves one of the top 100 bands of 2012. The band hit the east coast to support the album on a tour that spanned as far as Bangor, Maine. Later that year, the Austin Chronicle named Thieves one of the top 10 punk bands in Austin, placing them right above local legends, Riverboat Gamblers.
Thieves met New Jersey pop punkers, Coming Clean, during this tour and went on to release a split EP with the band on Love And Death Records on May 21st, 2013. These songs were the band’s first vinyl and cassette releases and showed a growth in their constantly evolving sound. In October 2013, PropertyOfZack premiered a well received music video for the EP’s single, Offline.
A west coast tour that took the band as far as Vancouver, BC followed the release of the split album. At the end of the tour, Thieves made a stop in Los Angeles, CA to record five new songs with Beau Burchell, who has produced multiple records for Capitol Records recording artist, Saosin, and many other notable acts including The Bronx, Hit The Lights, The Bled, and Bayside.
The band is actively seeking label partnerships to release the new EP and full-time touring opportunities in order to spread their hyper energetic live show as far as possible.
Thieves has shared the stage with Set Your Goals, Fireworks, The Swellers, Man Overboard, The Story So Far, Senses Fail, Stick To Your Guns, Authority Zero, Strung Out, Danzig Legacy, Paint It Black, Cave In, Trash Talk, Bane, Earth Crisis, Touche Amore, Defeater, The Wonder Years, Waaves, The Ataris, and many more.