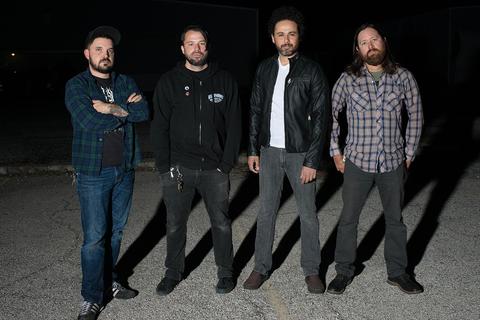 Volcanos on Lo (formerly the Austin, Tx band Phantom Lakes) is an American indie rock band, formed in the summer of 2012. The group consists of Jeremy Cruz (drums), Joel Ganucheau (vocals, guitars, samples), Joe Salinas (bass guitar) and Tyson J Swindell (guitars). They fall stylistically somewhere in between Fugazi and Sigur Ros, with clear post-punk, post-rock and pop elements.
Volcanos on Lo plays extensively across Texas’s major markets, and have been invited to appear at Chaos in Tejas and Fun Fun Fun Fest in 2013. They've shared billing with such bands as DIIV, The Appleseed Cast, Pelican, True Widow, Sebadoh, The Fall of Troy, Whirr, and The Life and Times.
Their first EP release, "Half-Light", was released November 2013. Recorded with Travis Bonner at The Diamond Factory in Austin, TX, "Half-Light" was self-released by the band in digital and CD format, while the Austin cassette-tape-exclusive label Better Days Will Haunt You released the tape version.
Past projects from the guys include (but are not limited to): Kissing Chaos, Pack of Wolves, Pop Unknown, Canoe, Pushmen, PanAmerican Standard, Svengali and Games and Theory.