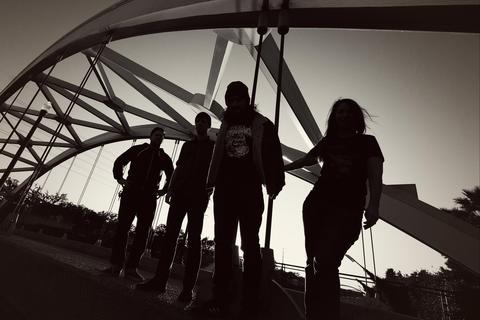 Listen to Throats of Snakes

Houston, TX based outfit Omotai crafts songs that are brief, frenetic explosions of sound, a deft blend of grindcore, sludge, progressive noise-rock, math metal and whatever else happens to be blowing the band's skirt up at the time, all of it reaching your ears sopping with distortion and twisted to superior volume. Sam Waters, Melissa Lonchambon Ryan, Anthony Vallejo cranked out their debut EP, Peace Through Fear, in a scant 2 days in 2010, followed up by 2012's LP, Terrestrial Grief,  which was hailed as "a hard-hitting throat-punch of assaultive noise" and an "interstellar masterpiece" by the Houston Press. February 2014 saw the release of sophomore LP Fresh Hell, out on The Treaty Oak Collective / The Path Less Traveled labels. The group became a four-piece adding guitarist/vocalist Jamie Ross in late 2013.