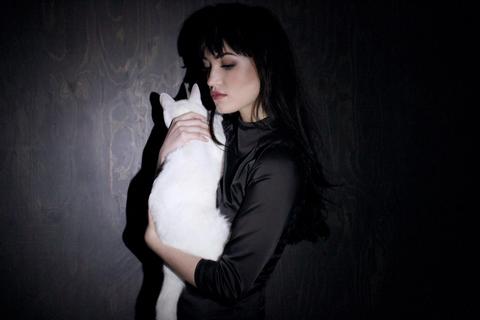 Unsigned 21 year old Cousin Marnie grew up in Hackney in an Irish Catholic family. Her mother doused her in country music from infancy. While attending a convent school run by nuns, Cousin Marnie began writing songs, assuming the pose of her country heroines, Loretta Lynn, Tammy Wynette, while articulating the sensibilities of the hip hop music which she found as a teenager.

Family holidays for Cousin Marnie revolved around visiting Alfred Hitchcock film locations. The towels in her home were stamped with the 'Bates Motel' logo. It is no wonder that she decided to christen herself after one of Hitchcock's leading ladies, Marnie, as played by Tippi Hedren.

On her first EP, 'Is Sleeping', Cousin Marnie re-imagined four Carter Family tracks from the 1930s. Marrying her two musical lineages the EP is a ticking collection of throbbing beats, synth drones and wistful country sentiment.

Cousin Marnie swears allegiance to Loretta Lynn and Kanye West from her bedroom at the top of her mother's house on an estate in Hackney, while her last live show saw her stomping around her own woodland of neon white rabbits.

The next EP next release, CainXY, is due in March and showcases Cousin Marnie's unique combination of country, hip hop and left-field pop.