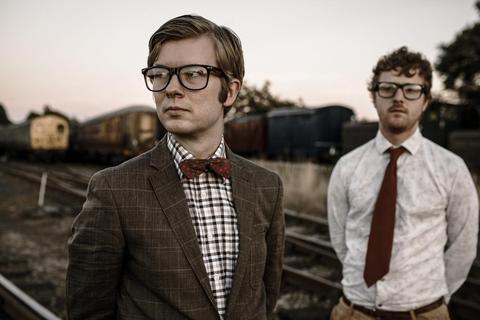 KCRW: "The most pleasant surprise of the 50 some odd bands I saw at CMJ this year ...Think R2D2 meets RJD2 in an editing workshop at the Anthology Film Archives, with an ipod featuring DJ Shadow, The Books, El Ten Eleven, STRFKR and Kraftwerk."

NPR All Songs Considered: "Ok, this may the best new thing for me at #CMJ complete w robot voice, banjo, samples, drums, film and they rock. Public Service Broadcasting."

Public Service Broadcasting is the corduroy-clad brainchild of London-based J. Willgoose, Esq. who, along with his drumming companion, Wrigglesworth, is on a quest to inform, educate and entertain audiences around the globe.

PSB's uniquely spell-binding live AV Transmissions see them weave samples from old public information films, archive footage and propaganda material around live drums, guitar, banjo and electronics as they teach the lessons of the past through the music of the future - beaming our past back at us through vintage TV sets and state of the art modern video projection devices.

PSB released their debut album Inform – Educate - Entertain on Test Card Recordings in the UK on 6 May. The album debuted at #21 in the UK album charts and received widespread critical acclaim including 5* Album of the Month from Artrocker Magazine plus 4* reviews from The Guardian, The Independent and many more.

The New York Times: "(PSB are a) high- concept duo from London. One played drums, the other handled banjo, guitar, laptop and keyboards; their songs, filled with optimistic aspiration."