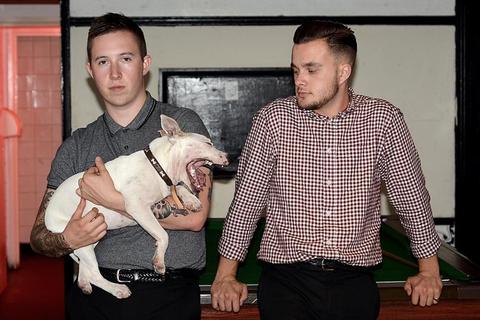 We are all SLAVES. We are all slaves to something; our jobs, our families, our friends, our lives, hostage to finance, the money we need to earn to survive. Kent based due Slaves, however, are breaking out of the shackles and doldrums with a vicious and highly original take on raw garage lo-fi indie punk fucking rock.
Fronted by Isaac Holman (22) on drums and vocals and Laurie Vincent (21) on guitar, Slaves are a punk band like no other. Isaac stands up in-front of his drums; there’s no kick drum, just snare, two cymbals and floor tom. He replaces the thud of the kick by battering on the floor tom, propelling the sound forward with tribal rhythms and a seething vocal attack whilst beside him Laurie peels off wave-upon-wave of brittle post-punk guitar noise. Slaves are fast, noisy, aggressive and real.

Having already played storming shows and tours around the UK with Drenge, Andrew WK and The Skints as well as an incredible set at Reading and Leeds festival in August, the festival appearance was also documented by BBC (link below) and has been followed up with a filmed Maida Vale Session (also linked) and full support across Radio 1 and Radio 6 including Zane Lowe, Huw Stephens and Steve Lamacq who are all now big fans of the young band. The song Beauty Quest (taken from their 2012 mini album ‘Sugar Coated Bitter Truth’) has already been heavily supported by Radio and there’s no sign of relenting as the band head out on tour later this month with Vuvuvultures around the country and complete the year by writing their debut album.

Their next single, the garage rock inspired ‘Where’s Your Car Debbie’ will be released in January 2014 and will mark what is looking to be a very exciting year for the band.

Who knew that only two young men from the Garden Of England could make so much noise?