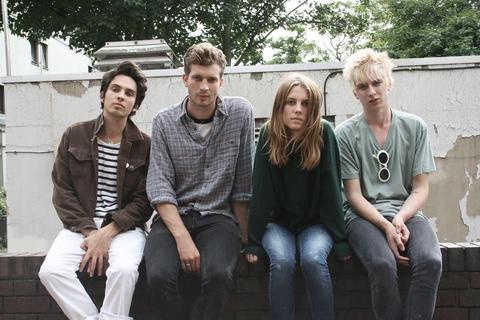 Even the simplest of intentions can exceed the wildest of expectations. The story of North London’s Wolf Alice is testament to that – a group brought together through the bedroom writing of frontwoman Ellie Rowsell and inspired by kindred spirit and guitarist Joff and drummer Joel Amey, who brought her softly-spoken, bittersweet tales from the bedroom to the limelight.

It was with Ellie testing the waters in the often dreaded open mic forums and uploading her very first songs to YouTube where everything really started. Finding kinship in Joff’s folk-meets-house mash-up channel – his escapist hobby amidst a journeyman life as a fitness instructor-cum-ice cream man – the two bonded and started work on Wolf Alice.

“Joff and I both did the rounds of north London open mics, always meeting weirder people than ourselves,” says Ellie about the beginnings of what would become Wolf Alice. “One day we realised we'd done all the hot and not so hotspots and still only had 10 Facebook likes each, so we were definitely doing something wrong. We were angry and upset so we just channeled that into our amps instead.”

“Ellie invited me round to her house and we played each other some of the songs we'd written and just hung-out and listened to music for a bit,” remembers Joff. “I remember thinking that she had a real nice voice and a pretty cool taste in music. To be honest, I was planning on leaving it there but Rob (Ellie’s dad) cooked me dinner and gave me a load of dodgy Bob Dylan CD's so I decided i would stay and give it a go.”

With a name taken from Angela Carter’s short story of the same name, where Ellie saw a likeness in “my big teeth, and Joff’s innocent curiosity – he was the Alice to my Wolf and I the Wolf to his Alice and nothing was more suiting to our country-esque ballads.” [via Yours Truly].Wolf Alice came to existence with a selection of highly-regarded but tiny shows in their north London habitat. But those self-proclaimed “country-esque ballads” were far more than the ever-modest Ellie gave credit to as the duo found their feet swiftly with songwriting that breathed acerbic lyricism, infectious guitar-laden melodies and a keen diversity in style.

Upon meeting Joel, whose musical endeavours had seen him fronting bands with a cow lick from a tender age including London trio Mafia Lights, the trio set about giving the once acoustic project a raucous reimagining. His love of hardcore – “everyone should listen to more hardcore”, says the harmony-singing drummer – gave Wolf Alice’s sound both a deliciously sinister new edge and a beautiful addition to their most tender moments.

“It was just great to hear someone actually SINGING A MELODY,” says Joel about his first time seeing Ellie and Joff at Powers Bar in London. “The venue was pretty empty but they looked like the coolest band, with tambourines and country and western songs - it was a raw mess and I loved it! They obviously ruled as it was and I remember all of us in the crowd getting super excited, like we'd seen a band that could actually do 'something' but in a place where no- one but us got it. I remember thinking how I wanted to work with them instantly, originally as a producer thing but it's somehow turned out that I've become the drummer.”

Emerging with a reformed sound at the tail end of 2012 with the saloon-door swing of ‘Leaving You’ – the band’s first statement as a now-four piece including Theo Ellis on bass – the word of Wolf Alice spread rapidly and found the band quickly being lauded by industry heads as one of the most exciting prospects around.

Now championed by Radio One, NME and many more as one of the hottest acts to emerge in 2013, the band’s debut single ‘Fluffy’ on Chess Club Records established them as one of the UK’s must watch new bands. A perfect statement of evolution from those tin-whistle folk beginnings, ‘Fluffy’ is a boystrous and wantonly balls-out number belying the tenderness they seemed to show off. But in the Hype Machine topping ‘White Leather’, the single’s b-side, their heart-wrenching way with words and sounds gave display to a band only just beginning to display their true powers.

“I guess we were surprised that people have taken to it the way they have, but obviously hugely flattered. People’s reactions to the contrast of ‘Fluffy’ and ‘White Leather’ has probably been my highlight. I'm always a fan of bands who never write the same song twice, and hopefully ‘Fluffy’ stands as an indicator as where we WON'T go next. We have no intention of releasing Fluffy Mk. II anytime soon or cop-out ‘Leaving You’. It's fun to watch people second guess our next move but we've got some nice surprises up our dirty sleeves yet.”

In forthcoming single, ‘Bros’, the quartet’s life-affirming purity shines at its brightest yet, offering the bewitching summer anthem they always wanted to write. One of the first songs Ellie ever penned and quickly becoming a championed live favourite, ‘Bros’ soars with its original and everlasting sentiments of childhood antics with the best of friends. Pulled gracefully through its beginnings by Joel’s tenderly quick-fire drumming and vocal harmonics, the song’s realisation was so moving that it brought Joff to tears (true story).

“‘Bros’ has always been hanging around as one of our favourite bedroom demos,” says Joff. “I think it’s a song that Ellie spent a lot of time on before even playing it out to the rest of us. You can still hear so much atmosphere in Ellie’s original and that was something we really wanted to capture when tracking the song for real. Joel’s uber dance boom bap rhythm has proved a crowd favourite too! From playing it so many times we have got to know the dynamics of the song more and more which benefited us when recording it.”

“I think we all knew we were onto something when Joff started welling up before we played it live the first time, although Joff’s crying isn’t that unusual,” Theo jokes. “This time it seemed to retain more meaning and emotional value it was kind of like he had found himself. I dunno.”

It’s that emotional value that continues to win over more and more hearts for Wolf Alice. A band of protective modesty, taking every step as it comes with a wry smile. Soon enough, they won’t be able to ignore the beaming ones of those around them.