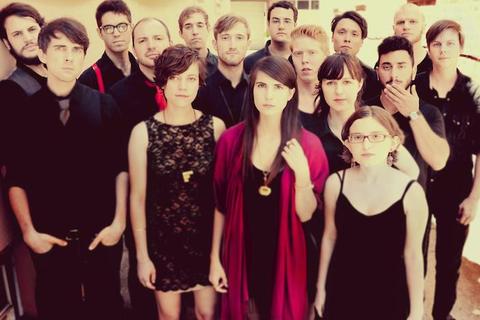 Mother Falcon began as a jam session among a group of high school cellists eager to break out of the classical repertoire that predominated their musical training. Since then, the band has evolved as an organic collective of classically trained young musicians determined to push their artistry into new musical territory.

Receiving as many accolades for their intimate chamber performances as for their electrifying club shows, Mother Falcon has crafted a signature soundscape by blending rock, jazz and hip hop rhythms with swirling horns and strings that alternately lead and support equally inventive vocal arrangements. In addition to violins, cellos, saxophones, and trumpet, the band includes piano, accordion, banjo, and bassoon.

Mother Falcon's debut EP, Still Life, was released in early 2010 and spawned the Austin hit "Marigold." Their first full-length, Alhambra, was released in February 2011 to immediate raves, and now the band has released their acclaimed sophomore album, You Knew. NPR premiered the first track off the album, “Dirty Summer,” naming the band an Artist To Discover At SXSW 2013. The orchestral-rock ensemble won over audiences with a string of intense performances, resulting in NPR Music including the band in “Bob Boilen’s 15 Essential Moments From SXSW 2013.”

At the 2010, 2011 and 2012 Austin Music Awards, Mother Falcon won the "Best None of The Above" award, and performed at all three ceremonies. The Austin Critics Table also nominated the group as "Best New Ensemble" in 2011, and that same year they performed at the abandoned Seaholm Power Plant with 100 additional string players as the opening event at the 2011 Fusebox Festival. In 2012 Mother Falcon headlined The Austin Chamber Music Festival, selling out the legendary Antone's Club.

To support You Knew, Mother Falcon launched the "Dirty Summer Tour," moving to New York City for the month of June and touring the west coast in August. In July, the band conducted its second annual Music Laboratory, a summer camp for middle and high school orchestra students. In the fall, the band will complete the score to the documentary film "Star Nation" and next spring they will compose music for "The Brothers Grimm," a stage production at The Austin Children’s Museum.