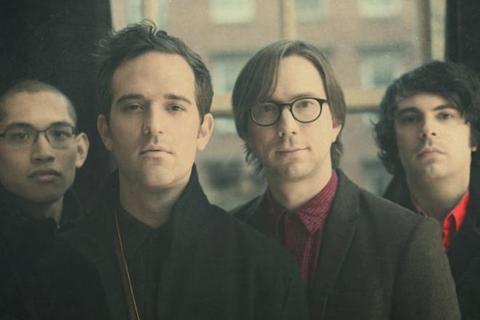 Audible fireworks explode in the distance of the opening moments of Milagres second album, the aptly titled, Violent Light. It is essentially elemental, as vocalist Kyle Wilson descends on lead track, “Perennial Bulb”, singing, “I am in a cloud”, keys and drums pounding around him as he issues the album’s thesis statement: “My feet are bare. They hit the ground. I’m running toward the miracle.” This is the way down and the way up for the band, fire exploding in the sky behind them, toes tucked firmly into the dark soil, running toward a transfiguration. Far from being the fleeting perennial bulb or mercurial firework, Milagres instead fill Violent Light with richness and delicacy, channeling influences as diverse as Bowie, Peter Gabriel and Kate Bush, providing a durability of vision and influence that is as much born from the earth as it seeks to return to it.

The history of Milagres runs back more than a decade as Wilson performed under the name as a solo artist before moving to Brooklyn and eventually linking with current members Fraser McCulloch, Chris Brazee and new drummer, Paul Payabyab. In 2011, official debut Milagres record, Glowing Mouth, yielded a sight-unseen signing to Kill Rock Stars, national club and European festival touring, and inclusion on numerous year-end “Best of” lists for 2011 and 2012. Eponymous single, “Glowing Mouth” introduced audiences to Wilson’s brilliant falsetto hooks, as well as the band’s blinking, cold-medicine aesthetic. It was a fever dream, a fantasy world full of pitch and yaw, blurry edges and limitless possibility, choruses that erupted and hooks that stuck. Independent rock fans and press took note, as well as radio outlets KEXP and KCRW. Returning to the studio with McCulloch on production duties, Wilson and the band set out to expand and clarify the warm neon universe of Glowing Mouth.

Violent Light begins at the beginning. Wilson found inspiration for the record in the memories of childhood summers spent with his grandparents in Northern New Mexico. The caves, valleys and mesa burial grounds of the Pueblo Indians intermingled with Wilson’s conversations about atomic physics with his grandfather, a scientist on the Manhattan Project of the 1940s and the development of the hydrogen bomb in the 1950s. This mixture of twin organic compounds, the history of ancient people who made their lives in these caves in the earth and the lethal, brilliant modernity of the mid-20th century, unite and blur on Violent Light. When the recording for the album was complete, Wilson returned to visit his grandfather, an attempt to unify these visions, the scientist and the outdoorsmen poet. The conversation bore no fruit, and the listener is left only with the brilliant tension between these twin naturalisms on Violent Light. The stakes aren’t life and death, but how best to live in the shadow of modern fatalism, to wrestle with the meaning of the fire in the sky.

The album ranges across eras and soundscapes channeling psychedelica, dream pop and classic rock. Lead single, “Jeweled Cave” rides a winking Bowie hook, surging keyboard and syrupy backing vocals. Wilson insists in the tracer fire of the chorus, “We were in love” as the arrangement swirls around him. The stakes are in the sky on “Black Table” as Paul Payabyab’s insistent drumming backs an arrangement that easily could fit in the Peter Gabriel catalogue. Stand-out “Terrifying Sea” swells with immediacy, Wilson again drifting through a dangerous and elemental geography before pleading for connection, “I want nothing but you touching me.” Perhaps this is the “core of light” that Chris Brazee describes as lying at the center of these dark compositions. Even the bright, synthesizer-driven, “Sunburn” has Wilson wrestling between the earthly and the modern, “You felt real in a world of plastic, a bit of grit in a sterile place, I’ll be the bird flying up into the sunburn”, another of the album’s instantly memorable hooks. It is the Icarus problem, to have flown so high and burned our little wax wings: The caves of the Pueblo Indians dug into earth of the testing sites for the atomic bomb.

These tensions drive Milagres forward on Violent Light. Melodies and lyrics written partially in wanderings through Greenpoint and Williamsburg day and nightlife, Wilson and the band apply their unique democracy to fleshing out the arrangements that appear on the record. They take the listener into the belly of a remembered landscape, a meditation on the self and modernity as we have come to know and fear it. On final track, “Another Light”, Wilson sings, “When I was young I was afraid that I would never find a way home”, closing the record with, “I’m not afraid to die a natural death”, the final rest in the existential crisis. This is the atomic bomb, the ancient burial site, the melody hiding in the bar at the corner of Franklin and Manhattan Avenues. This, then, is the miracle, the bare feet and explosions of Violent Light, an intimate and ambitious record from a band with its toes on the ground and its eyes in the sky.