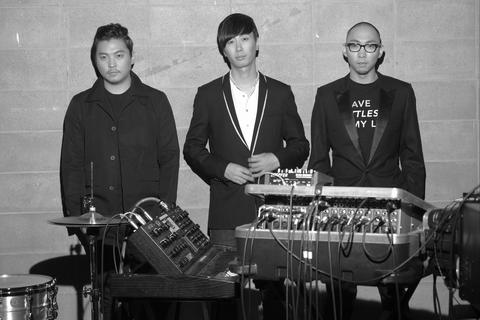 Award-winning South Korean electronic trio Idiotape formed in 2008 in Seoul. Producer and synthesizer player Dguru, who is also a highly-respected DJ in Korea, and synthesizer player Zeze teamed up with the simple goal of making “fun and enjoyable music.” The act was originally rounded out by a guitarist. But when said guitarist opted to leave, drummer DR (formerly of Seoul pop-punk / pop-rock act Sugar Donut) was brought on board in early 2010.

Influenced by Korean classic rock from the 1960s and ‘70s, Idiotape’s dynamic, synth-driven rhythms and electrifying performances quickly helped them climb the ranks in Seoul’s electronic and indie music scenes. In September 2009, the group earned an invite to play at the Korean edition of the world-famous Global Gathering festival – a remarkable feat considering they had been making music together for just over a year. In July 2010, Idiotape issued their debut “0805” EP. While supporting the EP, the group embarked on a North American tour in March 2011 to play at Canadian Music Week (CMW) and South by South West (SXSW). Garnering rave reviews at both events, the Toronto Star newspaper highlighted them in their “Nine acts that stood out from the pack” CMW wrap-up. That summer, Idiotape performed at two of East Asia’s biggest music outings, Korea’s Incheon Pentaport Rock Festival and Japan’s Summer Sonic.

In November 2011, Idiotape issued their first full-length album, “11111101.” The album garnered praise from critics at home and abroad and won “Best Dance & Electronic Album” at the 2012 Korean Music Awards. Idiotape played a number of high-profile events that year including the Seoul Electronic Music Festival , the Jisan Valley Rock Festival, and Sonic Mania in Japan. In March 2013, the group appeared at the Future Music Festival Asia in Malaysia. In April, Idiotape’s remix of the popular K-pop group f(x)’s “Ice Cream” track appeared on the “10 Cc X SM Seoul Melody” compilation EP. And in October 2013, the act made their fourth appearance at Global Gathering Korea.

In January 2014, Idiotape opened for Phoenix in Seoul, and in March they will make their second appearance at SXSW. The group also plans to issue new music in the coming months. Like their past acclaimed output, expect Idiotape’s next album to be brimming with more of their fantastic, infectious EDM.

Press Quotes:
“Seoul's Idiotape have been making waves internationally with their live mix of analog synthesizers and bombastic drumming. It's hard not to imagine a sea of people dancing to their forward-leaning energetic live electronic/EDM.” – SXSW.com

“If Cut Copy, Daft Punk, and Chromeo had a South Korean baby, they would beget the SXSW-bound, funkatastic, celebratory disco house trio Idiotape … The bespectacled crew has been getting audiences jumping manically on their feet in Korea for awhile, and now they’re prepping for global domination.” – MTV Iggy

“(Idiotape’s) beats are tailor-made for both clubs and the mosh pit. Their success on the festival circuit suggests that there is plenty of demand for their sound at home and abroad.” – The Korea Times

“It would be a damn shame if the only thing people get a chance to hear is tepid K-pop when there are cats as talented as these guys making brilliant music.” – Chincha

“Blending synthetic sounds and live drum playing, Idiotape is shattering the lines of electronic music and refuses to accept the definitions of genre.” – Vaffanculo Mag