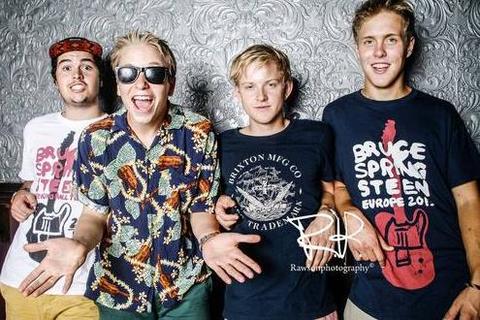 Listen to Lost At 17

The band members have known each other for most of their lives and discovered their passion for music together. From four-year olds hitting piñatas to little league baseball to surfing to collecting punk rock records; Max, Cole, and Joey formed the band in 2004 as Raining Souls. The name didn’t stick but it wasn’t long before inspiration arrived for one that would. Brothers Max and Cole’s 15-year-old cousin Emily was diagnosed with Cystic Fibrosis in 1998 and has suffered from the disease her entire life. In tribute, the band adopted the name Emily’s Army, which also happens to be the moniker for a fundraising organization in their cousin’s honor.

The prolific song-writing brothers Max and Cole Becker write songs and play guitar as if it was attached to them at birth. Travis, who joined the band in 2009, brings forth a guitar swagger that compliments the Becker boys and can serve as an anchor to the tumultuous brotherhood of the band. Joey hammers the drums with such energy; you’ll rarely find him sitting on his drum stool.

Teenage anger bleeds through the album in songs like “Broadcast This” and “Gutter”. Injustice is tackled in the track “Bad Cop” which sheds light on corrupt BART police. Max wears his heart on his sleeve with songs like “Strictly For The Birds” (an ode to Catcher in the Rye), “I Wanna Be Remembered” (dedicated to his cousin Emily) and "Burn Apollo" which resonates with pure honesty. The songs overflow with angst and sincerity, but they’re also catchy – sure to leave a memorable impact on any listener. The dynamics of the brother’s songwriting allow them to distinguish themselves – but this also compliments and adds to the chemistry of their sound.

The band has been playing clubs and all ages shows up and down the California coast for 2 years—even getting a chance to open a gig at the infamous Bowery Electric in New York City.

The boys hit the studio in November 2010 at Jingletown Recordings in Oakland, with engineer Chris Dugan and producer Billie Joe Armstrong. The entire album was recorded and mixed in 4 days…capturing the spirit and passion of a teenage rock n roll machine!