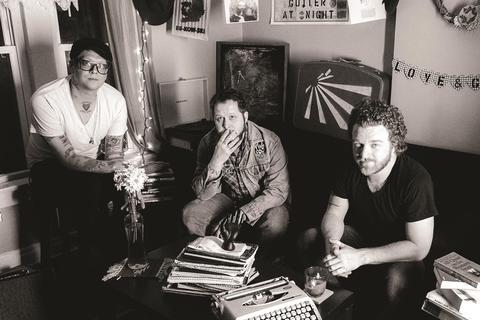 In 2003, Two Cow Garage--the Columbus, Ohio-based three-piece featuring Micah Schnabel (vocals, guitar), Shane Sweeney (bass, vocals), and David Murphy (drums)--released their debut full-length, 0Please Turn the Gas Back On. The powerful rhythm and sweeping melody of the record’s opening track, “Been So Long”, has since given rise to four additional full-length releases, a handful of singles, and a few solo efforts. The band has paraded their brand of heart-wrenching, yet ferocious rock-n-roll, which calls to mind Nirvana, The Men, and Dinosaur, Jr. through countless North American tours as well as several European sojourns. Two Cow Garage’s 2010 release, Sweet Saint Me, not only garnered airplay on WXPN's World Café where it was showcased as a featured artist selection, but also found its way onto many critics’ best-of lists. The band has performed at numerous festivals including SXSW, CMJ, The Fest, Pouzza, and has toured with acts like The Hold Steady, Drag the River, Slobberbone, and Glossary.

September of 2013 will mark the release of TCG’s sixth studio album, The Death of the Self-Preservation Society. Anchored by the title track, as well as “My Friend Adam”, the record showcases the songwriting crafts of both frontman, Micah Schnabel, and bassist, Shane Sweeney. Recorded inside a 100 year-old barn in Eden, NY at HI/LO Studios, The Death of the Self-Preservation Society was produced by TCG and features a handful of guests, including members of Lansing, MI’s Cheap Girls. Opening with the guitar and drum storm that composes “Little Prince and Johnny Toxic”, the entire album is propelled by the line, “no one makes it out alive.” The band effectively and expertly channels its desperate, full-on stage presence within the confines of the release’s 12 tracks. The Death of the Self-Preservation Society pauses momentarily in the slow-burn reverb of “Mantle in ’56”, where Schnabel claims to “dream in punchlines and sweet tragedies.” It recoils quickly into a swirl of sonic landscape that gives both power and persona to the notion that “we are the only ones who can forgive ourselves.” Hard-fought and short-lived, this forgiveness is fueled by the fact that--as the title track states--“the house is on fire.” Thundering bass riffs, distorted guitars, and crisp drum tracks work nicely with a penchant for multi-instrumentalism that makes space for nicely-timed trumpet flourishes and well-situated piano and organ tones. This release proves to further the arc of the band’s development and blur the lines between rock, Americana, and punk.

As one of the most consistently-touring indie bands today, TCG continues to captivate audiences with live shows that serve up manic stage energy, gritty chord changes, and subtle lyric-mindedness. The band’s intense, fiery persona conjures authentic tunes that would be as at home in a Raymond Carver story as they are on a car stereo in the dead heat of an August, midwestern night.