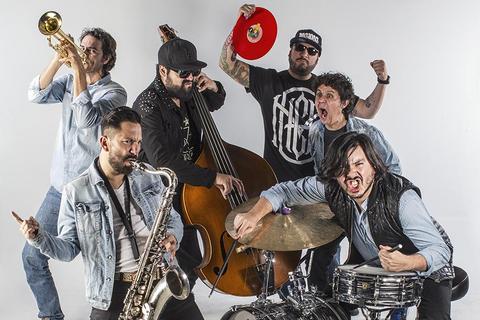 Troker’s groove is charged with explosive energy, rhythms going from jazz to rock that in the words of international magazine All About Jazz: "is noisy, chaotic, sprawling, messy, all together wonderful". Their concerts are challenging, full of intense and relentless moments that invite the audience to enjoy other musical genres in a more unrefined and entertaining way; a true fusion of genres -jazz, rock, funk and hip hop- all with Mexican flair.

The sextet started composing instrumental music since 2004, their first record “Jazz Vinil” was release on 2007 and their second album "El Rey del Camino” (King of the Road) won best independent album IMAS 2010 Jazz/Fusion. After that in 2011 they released the EP “Pueblo del Brujos” (Wizards village) and by the end of 2013 they will edit a special LP called “1919 music for cinema” inspired in the original score the band composed for the most important silent Mexican movie called El Automovil Gris. In 2014 for their SXSW showcase the 4th record will be ready, and you can feel where is it going in their single “Principe Charro” available on Soundcloud.

Troker has 7 international tours through Latin America, USA and Europe where they performed at the legendary Glastonbury Festival in 2013 and will do again in 2014. This is how from the land of tequila, Troker export their music to the world.