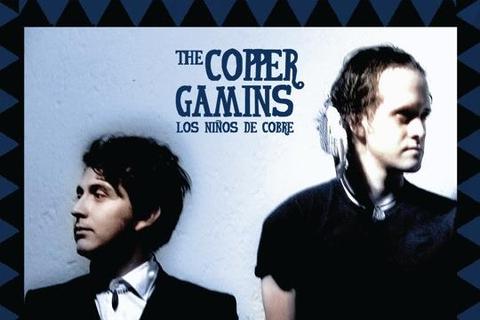 From the mountains of Mexico to the Mississippi delta to the garages of 1960s America to the Hollywood silent film studios of yore and early Mexican Revolutionary songs, The Copper Gamins cover some major musical ground with just guitar, drums and vocals (and the occasional less-than-fully-strung mandolin). With a sound that ramps up primitivism into a modernist atomic blast, they play what The Big Takeover hails as "raw cacophonic trash rock with wild child naiveté" with "dirty, unrepentant 'bash the blues to hell' delinquency."

It's just what comes naturally to singer, guitarist and songwriter José Carmen and drummer Claus Lafania. The result is "a kinetic ball of lo-fi goodness," as Rank and Revue described their 2012 debut EP on Saustex Media. Now with their 17-song strong first full album, Los Niños de Cobre, the duo splash their south of the border hot sauce onto the American roots'n'rock gumbo to offer a “potentially lethal mix,” as the San Antonio Current warns, of organic visionary indie music.

Los Niños de Cobre expands the Copper Gamins' sound while still hewing to their extemporaneous approach. The raucous opening children's rhyme "All Hid," the haunted "Little Gold," the down'n'dirty dirge of "This Old Boy" and the mystery-laden guitar riff of "Wet Sounds" all draw from Carmen's primary musical wellspring of pre-World War II field recordings by folklorists like John Lomax. He writes his own children's-style ditty on "Learn A Song" and ruminates on improvisation on the anguished blues "Is This All Mine," both of which ponder the perplexing magic of songwriting. And he explores such primal themes as accepting one's obsessive thoughts (on the Nuggets-flavored blues-pop stomp of "Oh Well Well"), being an entertainer (the metallic squall "Bid The Copper"), fair-weather friendship and love (the crackling march "You Keep Around') and a reassuring letter home (the back porch acoustic bottleneck-style country-blues "Tell My Sister'). From the tearful slide guitar of "Golden Card" to the minimalist mandolin instrumental "Supermaxima" that closes the album (and finishes the tune first heard on last year's EP), Los Niños de Cobre plays like radio signal specter from the past that enchants with the lo-fi mesmerism of today.

Or as Rank and Revue observes of these musical naturalists, "they hail a musical style as roots to America as you can get. But like very few before them, they put a nice twist on the genre." Reared in the nearby Central Mexican towns of Metepec (Carmen) and Zinacantepec (Lafania), the two high school friends started playing music in teen bands that covered Latin and English-language pop songs – Carmen then on drums and Lafania on guitar – but after graduation went off in search of something truer to their souls.

Carmen switched to the guitar and honed his distinctive minimalist style and songs playing on the streets and in coffeehouses in Mexico City. Lafania studied economics and international business and traveled in Europe. When the two later met up again, Lafania also shifted instruments and took up the drums.

The two recorded the songs on their debut EP in an abandoned house owned by Carmen’s aunt with just a few microphones and a mixer onto a Teac four-track reel-to-reel recorder. “It was not just being lo-fi but self-sufficient, and doing what we can with what we have around,” explains Carmen.

Daunted at securing gigs in Mexico, they headed north to Texas and barnstormed music clubs in San Antonio and Austin. The San Antonio Current was duly impressed by one gig, declaring the twosome "one of the most explosive, groovy openers of any show I’ve seen this year. Carmen shreds and twangs with unusual ferocity, but he’s a master of silences as well. His thing is to deconstruct the blues into a rhythmic mass that, when it’s actually finished, works like a cannon.” They also caught the ear of Saustex major domo Jeff Smith, who offered to release the band’s recordings in the U.S. in conjunction with Cosmica Artists owner Gil Gastelum.

The Copper Gamins have recently released their latest tribute to mexican music, a wild and inocent rendition of Agustin Lara's love song Rosa, and their own version of classic African Mexican sleeping song, Drumi. Inspired by Toña la Negra.