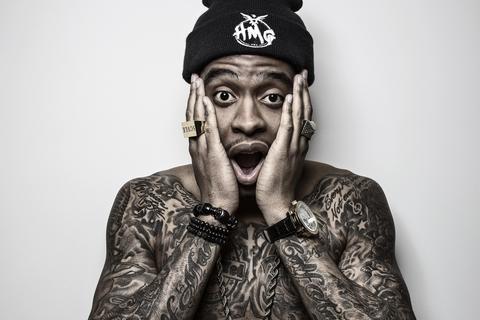 Nyzzy Nyce, aka Nyzzy, stands pensively in a park on the outskirts of his hometown Fort Wayne, Indiana. He reflects, “Being an artist in a small town is definitely a tougher task. We work with what we got and we go hard for what we believe in.”

When he was twelve years old, he took up BMX racing at his step dad Gregory’s urging. Gregory lost the ability to walk when Nyzzy was still a child. He ponders, “I would always think, if he could walk again, what would he do?” He took up racing to make him proud.

It started out casually. He practiced downside tailwhips and turndowns on the half pipe at the local skate shop. Improving daily, he wanted to do more. After a year he began racing competitively in BMX events.

They called him a natural. Veterans of the scene began to bet money on him. He ascended rapidly up the charts, becoming the number one rider in his age group at fourteen. He attained sponsorships from Fort Wayne BMX and Gatorade along the way. Number one in two years. It was almost too good to be true…

And it was. He tore his ACL in the summer of 2002, two months into his stint at number one.

After a lengthy recovery, that fiery, competitive spirit that drove his ascent up the rankings parlayed into his newest interest: music. He began freestyling with friends at the lunch table. As time progressed, what began as a distraction slowly evolved into a passion.

Nyzzy worked relentlessly to perfect his craft, releasing a slew of projects along the way. All the while, he prepared himself for bigger and better things, a larger platform to take his music and his message.

The first step came in 2012, when he partnered with non-profit A Better Fort to start the ambitious, collaborative music project called the #MyCity Movement. The movement began as a means to showcase the many talented musicians and artists within the Fort Wayne community and instill a renewed sense of civic pride for residents. Later that year, he founded his own label, Hurricane Music Group.

Nyzzy’s debut album “Have A Nyce Day” is slated for release in 2014. The album features Nyzzy’s laidback vocals over an eclectic array of trap-infused drums, feel good melodic synths and trunk-rattling 808s. Fans can anticipate videos for the singles “All My Life", "Superstar" and "I'm Young" throughout the year.

Nyzzy is a rare breed of an artist who combines his sensibility for social entrepreneurship, altruistic nature, and passion-fueled lyrical ability to create infectious music. He says, “I do something, I fall into it, and I don’t stop.”