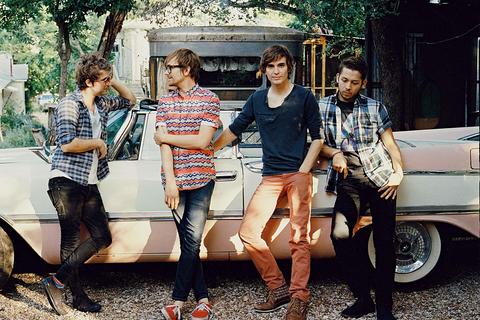 Sometimes, success comes easy. Other times, you have to grab life by the collar and make it happen. For San Antonio’s Wild Party, both could not be more true.

The indie power-pop quartet will release their first official EP, All Nighter, this May. Although this is their first “official” release, early indicators of success have already shown off Wild Party’s huge commercial potential.

Wild Party, made up of vocalist Lincoln Kreifels, guitarist Lucas Hughes, bassist (and Lincoln’s older brother) Jake Kreifels, and drummer Ethan Kaufmann are still a young band, but they have already been around the block and across the pond.

The band were thrust into the spotlight early in their career when they were offered a gig to support The Wombats on tour across the UK in 2010. Only 19 at the time, frontman Lincoln Kreifels had only played two previous live shows before the whirlwind UK tour.

Kreifels was a natural rock star. Fans flocked. John Kennedy of UK’s Xfm radio picked up the band’s single “Take my Advice” and broadcast it over the air to millions of listeners. As Wild Party hit their stride, word of mouth and Internet buzz grew and fans started to speculate as to when the band would release an album.

Without label support, Wild Party seized the moment and took a DIY approach—first releasing a music video for fan-favorite “When I Get Older” on YouTube in January 2013—and soon after, debuting a collection of songs on iTunes that they self-recorded and produced under the title Phantom Pop.

Within 24 hours of its release, Phantom Pop cracked the iTunes Top 100 and music journalists, would-be managers, publishing companies and hopeful record labels swiftly came knocking at their door. With the influx of support, Wild Party plucked the record from iTunes and will soon release their debut EP, All Nighter.

The EP boasts four tour-tested, fan-approved nuggets that deserve the wider audience that they are slated to reach. Lincoln Kreifels and Lucas Hughes, who have been best friends since childhood, write feel-good, catchy pop songs with relatable themes and honest lyrics. The songs were recorded by Ethan Kaufmann, the band’s drummer, alongside Wild Party in his Dallas studio and mixed by Mark Meedham and Tate Huff.

Throughout the EP, Kreifels’ voice soars over driving rhythms and grubby guitar riffs like Brandon Flowers of The Killers or Julian Casablancas of The Strokes. The EP leans towards refreshingly sincere simplicity and avoids overwrought, too-clever lyrics in favor of fun, dance-ready tracks akin to Phoenix or STRFKR.

As Wild Party blaze their own path in the music world, their passion and obvious talent continue to propel them forward. All indicators predict a sure and steady march towards success—whether it comes easy or not.